Home > Back to Search Results > French Revolution: The Rights of Man, and the beginning of a new Constitution...
Click image to enlarge 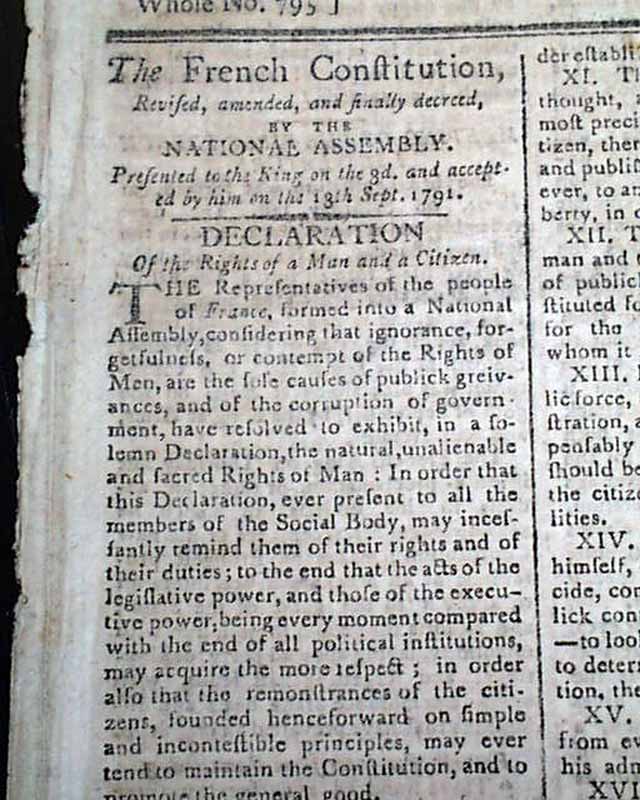 French Revolution: The Rights of Man, and the beginning of a new Constitution...


COLUMBIAN CENTINEL, Boston, Dec. 7, 1791  A very notable issue on the French Revolution as the front page begins with: "The French Constitution, Revised, Amended and Finally Decreed by the National Assembly".
It begins with the historic "Declaration Of The Rights of a Man and a Citizen" which includes all 17 Articles (there were several iterations but the essence of each Article remains).
This is followed a lengthy report beginning: "The National Assembly meaning to establish the French constitution...There is no longer nobility, or peerage, or hereditary distinctions...No publick office is any longer saleable or hereditary..." and then the details on their Constitution begin, taking the balance of the front page and a bit of page 2.
Page 2 also has an interesting account of King Louis XVI speaking before the National Assembly.
The complete text of this rendition of the Constitution continues in the next four issues.
Four pages, very nice condition.