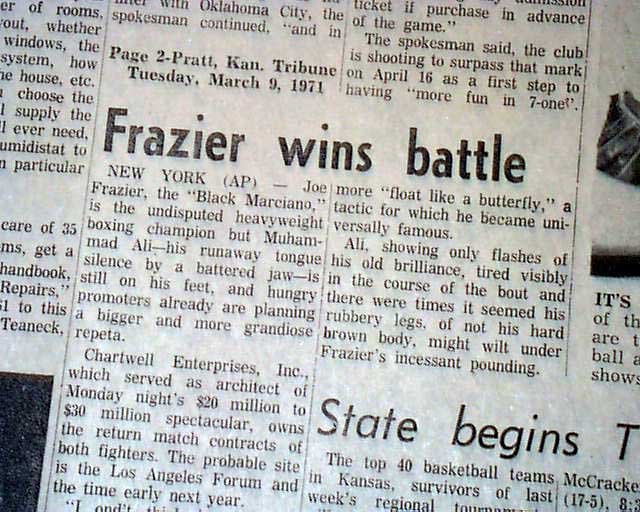 wikipedia notes: On March 8, 1971, at Madison Square Garden, Frazier and Ali met in the first of their three bouts which was widely called the Fight of the Century in pre-bout publicity and the press feeding frenzy. With a worldwide television audience, and an in-house audience that included luminaries such as Frank Sinatra (as a photographer for Life magazine to get a ringside seat), comedian Woody Allen, singer Diana Ross, and actors Dustin Hoffman and Burt Lancaster (who served as "color commentator" with fight announcer Don Dunphy), the two undefeated heavyweights met in the kind of media-frenzied atmosphere not seen since Joe Louis' youth.

Many factors came together for Frazier in this fight. He was 27 years old and at his lifetime peak both physically and mentally, while Ali, 29, was coming back from a three-year absence, taking on Frazier soon after a bruising battle with Oscar Bonavena, whom Ali had defeated by a TKO in 15. Frazier had exhaustively trained specifically for Ali under the tutelage of famed coach Eddie Futch, who had developed a strategy based on Ali's tendency to throw the right-hand uppercut from a straight standing position after dropping the hand in preparation to throw it with force. Futch instructed Frazier to watch Ali's right hand and, at the moment Ali dropped it, to throw a left hook at the spot where they knew Ali's face would be a second later.[1] [2] Frazier's staggering of Ali in the 11th round and his knock-down of Ali in the 15th were both executed precisely in this way.

Frazier lost a number of early rounds but took Ali's combinations without backing down. As Ali started to slow in the middle rounds, Frazier came on strong, landing hard shots to the body as well as the powerful left hooks to the head by virtue of Futch's instructions.

Consequently, Frazier won a clear, 15-round, unanimous decision. Ali was taken to the hospital immediately after the fight to have his badly swollen jaw x-rayed, and Frazier spent time in the hospital during the ensuing week.