Home > Back to Search Results > Gunfight at the OK Corral...
Click image to enlarge 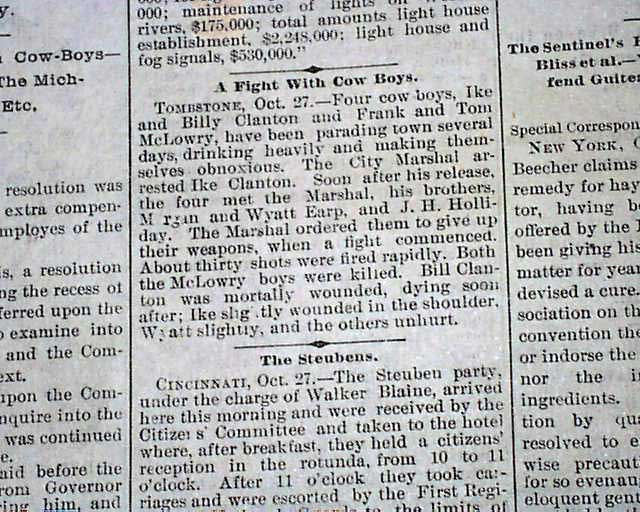 Gunfight at the OK Corral...

Rarely did period newspapers report the now-famous "gunfight at the OK Corral", which did not become a part of modern Western folklore until the 1957 movie of the same name. This major newspaper from Indianapolis did report the event.
Near the top of page 2 under the heading: "A Fight With Cow Boys" is a report datelined: "Tombstone, Arizona, Oct. 27" which begins: "Four cowboys, Ike and Bill Clandon [Clanton] and Frank and Tom McLowery have been parading the town for several days, drinking hard & making themselves obnoxious..." with more, including mention of Wyatt Earp and Doc Holliday (see photos for the full report).
The details are not lengthy but are significant in being reported at all, giving evidence to the insignificance of the event at the time (also why many newspapers did not report it) but one which has grown to be considered the most legendary event in the history of the Old West.
Complete in 8 pages, rejoined at the spine, nice condition.
A cornerstone issue for any collection on Western Americana.