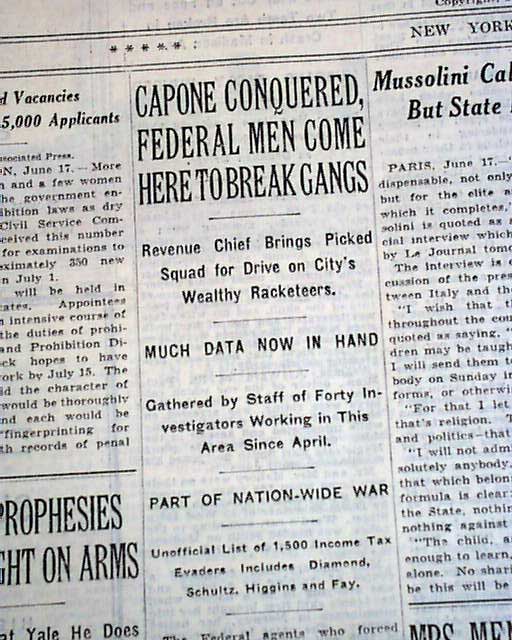 The front page has a one column heading: "CAPONE CONQUERED, FEDERAL MEN COME HERE TO BREAK GANGS" with subheads. (see) Much more on page 3. Coverage on Al 'Scarface' Capone pleading guilty Income tax evasion. He would later retract his plea after he realized the potential penalty he would receive. He would eventually be found guilty later that year which would end his criminal career.
Also on the front page near the bottom is: "'Dutch' Schultz Seized, His Companions Shot As they Show Fight When Accosted by Police" (see) Nice to have articles on two infamous gangsters on the front page of this venerable newspaper title.
Other news, sports and advertisements of the day. Complete in 56 pages, this is the rare rag edition that was produced on very high quality newsprint, with a high percentage of cotton & linen content, allowing the issues to remain very white & sturdy into the present. Given the subscription cost, libraries & institutions rather than individuals were the primary subscribers of these high-quality editions. A few binding slits along the spine, very nice condition.