Home > Back to Search Results > The Suffolk Resolves...
Click image to enlarge 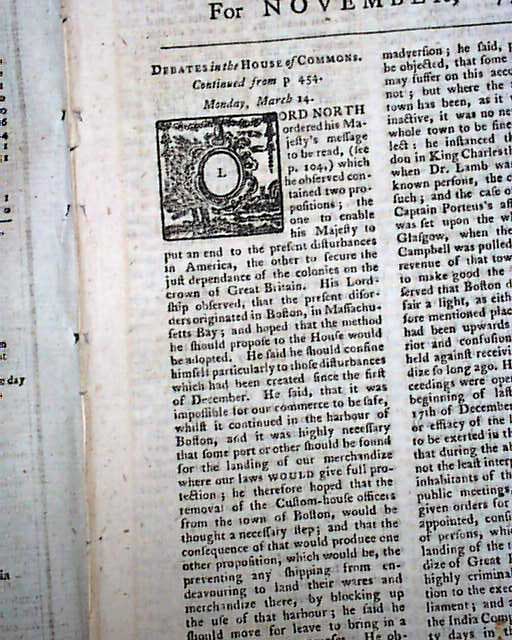 The first 3 pages of text contain reports from the "Debates in the House of Commons" relative to the situation in America.
Another nice report is headed: "Causes of the Present Discontent & Commotion in America" which includes a list of 13 reasons, the first of which reads: "The stamp act, by which duties, customs & impositions, were enacted without & therefore against, the consent of the colonies..." followed by the other twelve.
Further into the issue is an historic report headed: "Account of the Proceedings of the American Colonies since the passing the Boston Port Bill" which is continued from a previous issue, but this report includes the Suffolk Resolves, prefaced with: "At an assembly of delegates from every town in the county of Suffolk in America, of which Boston is the capital, resolutions to the following effect were unanimously agreed to..." and what follows are the points of the Resolves, which on Sept. 17 would be endorsed by the First Continental Congress in Philadelphia & reported as such in this issue (delivered to Phila. by Paul Revere, although not mentioned here).
These Resolves proclaim the Coercive Acts unconstitutional & advise Mass. citizens to form a tax collecting body & to hold the taxes in escrow until the Coercive Acts are repealed. Great to have the text of this historic document in a period magazine, rarely found in American newspapers.
Another page has: "Part of a Letter from a Native of Pennsylvania to his friend in London".
Near the back is the "Historical Chronicle" with various news reports, and which includes some items from America, bits including: "...Application having been made by General Gage to the workmen in Boston & New York to assist in compleating the fortifications on Boston Neck...An application of the like kind was made to the merchants of Philadelphia to supply the troops with necessary provision and clothing & met with the same repulse..." and more.
Lacking both plates called for.
Complete in 48 pages, 5 by 8 1/4 inches, full title/contents page featuring an engraving of St. John's Gate, nice condition.