Home > Back to Search Results > Robert E.Lee on the death of Stonewall Jackson...
Click image to enlarge 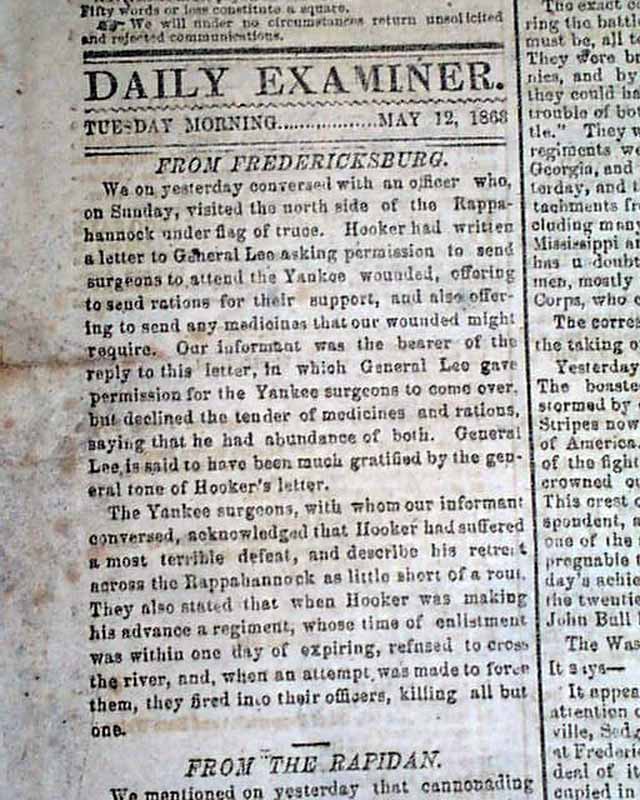 Robert E.Lee on the death of Stonewall Jackson...

* Robert E. Lee on the death of Stonewall Jackson
* Confederate title from the rebel capital

Not only is this a nice newspaper from the Confederacy, but it is from the Confederate capital.
The front page has much on the war, with items headed: "From Fredericksburg" "From The Rapidan" "Latest News From the North--More Of the Battles About Fredericksburg--Confidence of the Yankees of Victory--Full Account of Stoneman's Cavalry Raid--The Attack on Grand Gulf" with many subheads.
Further on is: "Stoneman's Cavalry Raid--Full Account of His Exploits--Wholesale Destruction of Bridges, Rebel Property--Great Joy of the Negroes at the Approach of the Yankees--They Act as Spies and Give Valuable Information--Numbers Anxious to Return with the Yankees--The Loss Sustained by the Expedition" and also: "The Yankee Account of the Attack on Grand Gulf" which is signed by: David D. Porter (see).
But perhaps the best item on the front page is: "General Lee's Order On The Death of General Jackson" being his General Order No. 61 in which he mentions: "With deep grief the commanding General announces to the army the death of Lieut. General Thomas J. Jackson..." with more, signed in type: R. E. Lee, General. Stonewall Jackson died of a wound inflicted by friendly fire at the battle of Chancellorsville.The back page has a lengthy editorial concerning recent events of the war, with a decidedly anti-Yankee theme. Also: "From New Orleans..." and "A Quandary" plus "City Intelligence" and various ads.
Complete as a single sheet newspaper, some loss at the bottom, blank margin does not affect any text, some browning or dirtiness at folds &  edges.