Home > Back to Search Results > The funeral of Stonewall Jackson... The Battle of Chancellorsville...
Click image to enlarge 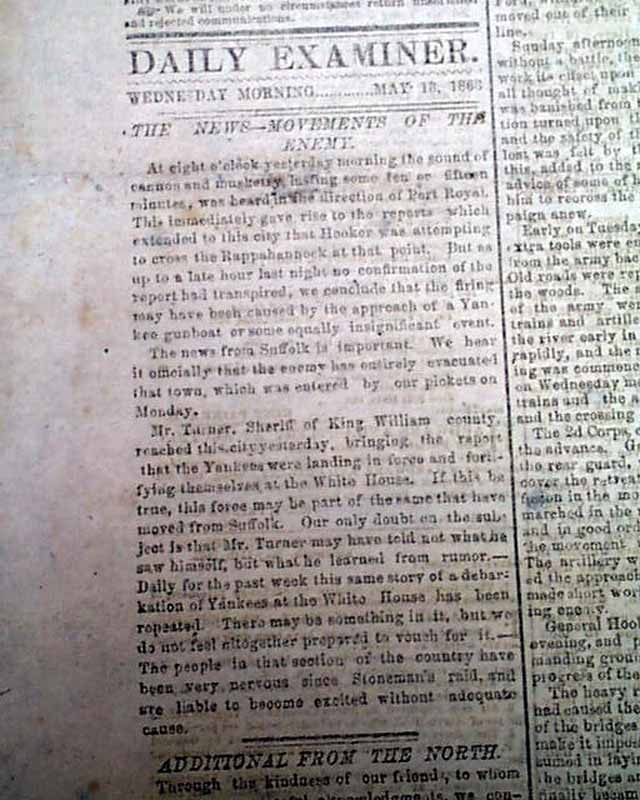 The funeral of Stonewall Jackson... The Battle of Chancellorsville...

* General Stonewall Jackson death funeral
* Battle of Chancellorsville, Virginia
* From the capital of the Confederacy

Not only is this a nice newspaper from the Confederacy, but it is from the Confederate capital. This issue has a very significant report in the funeral of Stonewall Jackson, who died just three days prior following wounds inflicted by friendly fire at the Battle of Chancellorsville.
The back page has a report headed: "City Intelligence" with smaller head: "The Lying-In State of the Body of General Jackson at the Capital--Honors To The Dead--Military and Civic Procession, etc." with the text beginning: "The ceremony of transferring the remains of the late General T. J. Jackson from the Governor's Mansion to the Capitol was yesterday made the occasion of a solemn pageant, in which the Confederate and State official, from the highest to the lowest, & citizens joined with one heart & feeling..." with more. There is considerable detail, with other bits including: "...The body, prepared and embalmed during the night,w as contained in an elegant metallic burial case, which stood in a raised position in the centre of the reception room...One look, though it sufficed not, was all that could be obtained by each visitor. The throng behind pressing the visitor forward; the features of the mighty warrior in death's repose, graven upon any borne away upon the tablets of the memory of all. Children of tender years, maiden and youth, who had never seen 'Stonewall' Jackson living, crowded in full of the parental injunction to look upon the features of 'Stonewall' Jackson dead..." with even more (see photos). The complete funeral report takes almost an entire column, and terrific to have this account in a newspaper from the capital of the Confederacy, where the funeral was held.
As if this was not sufficient, there is much war news in this issue as well, including ftpg. accounts: "Te News--Movements of the Enemy" "Additional From The North" and smaller heads: "The President in Consultation with General Hooker" "Storming of Marye's Heights at Fredericksburg" "Yankee Speculations of a War With England" "Affairs About Suffolk--Reconnaissance Across the Nansemond" and even more.
The back page--in additional to the Stonewall Jackson funeral report--has an interesting column-long editorial, and also a list of: "Casualties In The Battles About Fredericksburg" "Later From New Orleans" with subheads: "General Banks' Operations--Occupation of Opelousas" "General Orders No. 28" and more.
Complete as a single sheet newspaper with a full banner masthead, some light soiling near the folds of the front page,otherwise in uncommonly nice, clean condition.