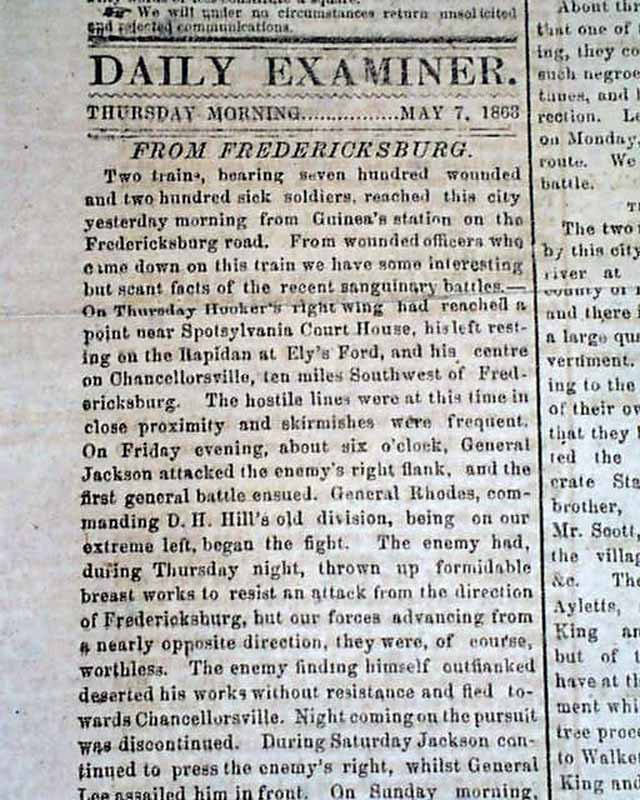 A nice front page account of the Battle of Chancellorsville, a major Southern victory. the top of the first column has: "From Fredericksburg" taking most of the column & including: "...The enemy finding himself outflanked deserted his works without resistance & fled towards Chancellorsville...During Saturday Jackson continued to press the enemy's right, whilst General Lee assailed him in front..." with much more (see). This is followed by: "The Last of The Great Yankee Raid" with subheads: "The Yankees in King William" & "Chickahominy Bridge". Then: "An Appeal for our Wounded".
The front page also has: "The Yankee Raid in Georgia--Official Account" with has a nice report  signed  in type by: Braxton Bragg (see). Other items on the ftpg. having small heads include: "Official Account of the Destruction of Barges Off Vicksburg" "Bodies of the Fallen Received" "The Wounded--A Call to the Patriotic" "The Chesapeake Artillery" "The New Flag" "Prisoners of War" and more.
The back page editorial--always interesting reading in this newspaper--is an assault on General Hooker, defeated at the recent Battle of Chancellorsville, bits including: "The depravity of Northern sentiment cold not be more forcibly exhibited than in the expectations which that people had formed from such a mountebank & braggart as the now beaten & disgraced Joseph Hooker. that he is a man without faith, truth, honor, or any of the distinguishing qualities of a gentleman, is established..." and much, much more.

The bkpg. also has: "Additional From The North--A Northern Estimate of General Bragg's Army..." (see), which takes over a full column. The back page also has a great item: "Fred. Douglass Lectures on the Negro" with a brief review of his speech in a New  York church, ending with: "...Having gone on at length in vindication of his colored brethren, the speaker brought his remarks to a close amid applause from the audience." (see)