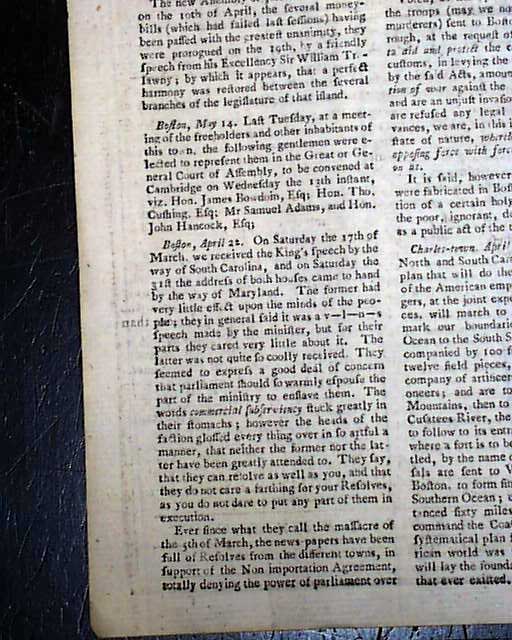 THE GENTLEMAN'S MAGAZINE, London, June, 1770  The reverse of the title page is entirely taken up with "American Affairs" which includes a report that the freeholders of Boston have elected Sam Adams & John Hancock (among others) to represent them in the Assembly to be convened at Cambridge.
Other reports from Boston include mention of the Boston Massacre: "...Ever since what they call the massacre of the 5th of March, the news-papers have been full of Resolves from the different towns in support of the Non-Importation Agreement, totally denying the power of parliament over the colonies & the King's right of lodging troops in any of the provinces without the previous consent of their legislature..." and what followed are various resolves. Also a report from Charleston.
Elsewhere is a letter from the Empress Maria Theresa to the future Louis XVI on his marriage to her daughter, Marie Antoinette. Relating to this is a report near the back on the marriage of Louis XVI and Marie Antoinette, beginning with how they met: "...They met at the bridge of Berne in the forest of Compeigne, and their first salutation was very tender and affecting." Then is a report about their wedding reading in full: "The ceremony of the nuptials of the dauphin and dauphiness at the chapel royal at Versailles by the archbishop of Rheims. After supper, the king having conducted their highnesses to their apartment, and the benediction of the bed having been made by the archbishop, the king delivered the shirt to the dauphin, and the duchess of Chartres, performed the same office to the dauphiness." Then a bit further on is a report of celebrations on the marriage, beginning: "The grandest fireworks that have ever been known were this evening exhibited in the Square of Lewis XV at Paris in honour of the Dauphin's marriage...".
Also two pages on the: "Proceedings in council Against Sir Francis Bernard on a Complaint lodged against him by the Assembly of Massachusetts Bay".
The plate called for is present.
Complete in 48 pages, 5 by 8 1/4 inches, full title/contents page featuring an engraving of St. John's Gate, very nice condition.