Home > Back to Search Results > Confederate Victory at Chancellorsville & much more...
Click image to enlarge 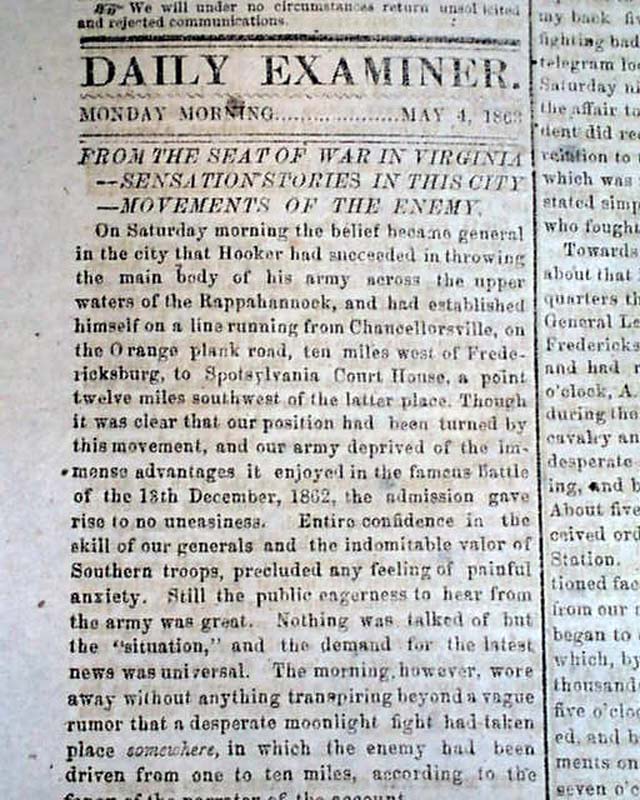 Confederate Victory at Chancellorsville & much more...

Not only is this a nice Confederate newspaper, but it is from the capital of the Confederacy.

Much war reporting in this issue, as the top of the front page has an historic & significant report headed: "From The Seat Of War In Virginia--Sensation's Stories In This City--Movement Of The Enemy" which covers the battle of Chancellorsville as it was still going 0n. Bits include: "...On every hand the questions were asked''Where is General Lee?--Where is our army?...The above, coolly translated, seems to mean that the Yankee cavalry...left Spotsylvania Court House..." with more, followed by additional reports which hafe subheads including: "News By the Fredericksburg Cars Saturday Evening" "The News of Yesterday" "Later--Rumored Advance of the Enemy Upon Richmond" "Still Later" "The Latest" and "The Battle at Fredericksburg".

More war-related items are on the front page including: "From Suffolk" which has a General Order signed in type by: John B. Magruder, following which is: "The Yankee army is said to be laying waste to the whole country around Suffolk...the Yankees have burned every house & destroyed everything within their lines..." & more. There is also "Telegraphic News" which has some war items.

The back page has a tremendous amount of war content, including an editorial which includes: "The Confederacy has never received an insult so mortifying & provoking as that which it suffered yesterday & the day before. The Federal army had reached & taken possession of Spotsylvania Court House...their cavalry, under General Stoneman...He is no longer an able, prudent officer making war according to the established rules of the science, but a reckless gambler..." with more (see). Also on the bkpg: "A Scout Into the Shenandoah Country" "Dash On the Baltimore & Ohio Railroad by the Confederates--Tearing up the Track, etc." "The Situation About Suffolk" "The Siege of Vicksburg--Failure of the Transports to Pass the Rebel Batteries..." "Missouri" "Latest News From the North" and more.

A single sheet issue as was typical in the South in the latter half of the war as most paper mills were in the North and every effort was made to conserve paper use. Folio size and in uncommonly nice, clean condition.