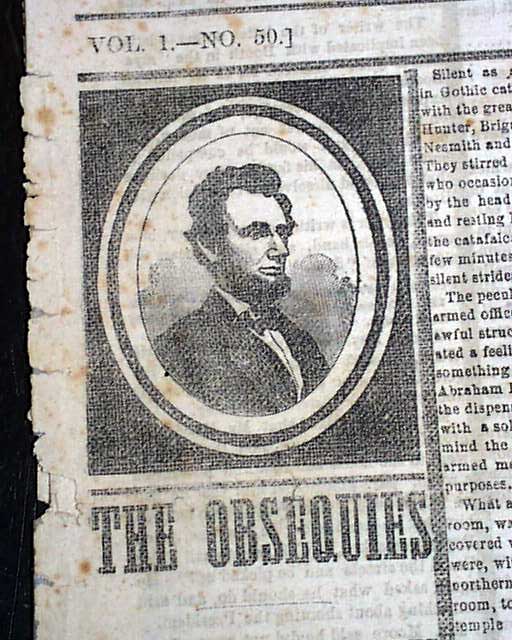 Truly a terrific issue, for being a weekly newspaper this was the first report of this event in this title, and better yet it is from the city where the assassination happened. A notable--and very uncommon--graphic on the front page is the black-bordered cameo print of Abraham Lincoln, with all columns on all 8 pages black-bordered in memory of Lincoln. The first column on the ftpg. has heads on the funeral ceremonies with the more significant & historic headlines found on pages 2 & 7 including: "THE ASSASSINATION OF THE PRESIDENT" "The Terrible Details" "When, Where, and How The Deed Was Done" "Sketches of the Scenes" "The Murderer & His Victim" "The Room in which the President Died" "THE NATIONAL CALAMITY" "The National Horror-stricken at the Deed: "THE MURDER OF PRESIDENT LINCOLN" "Clear Statement of an Eye-witness" "Reward For the Capture of the Assassins" and even more.
There is a great deal of text as well, giving one of the more graphic and extensive accounts of the assassination I have seen in any newspaper. Very desirable having all of this in a Washington, D.C. newspaper.
Complete in 8 pages, never bound nor trimmed, a bit irregular at the spine with some archival mends at the blank spine, archival mends on page 2 at the central fold with some perforation at the folds causing loss to several words, otherwise good.