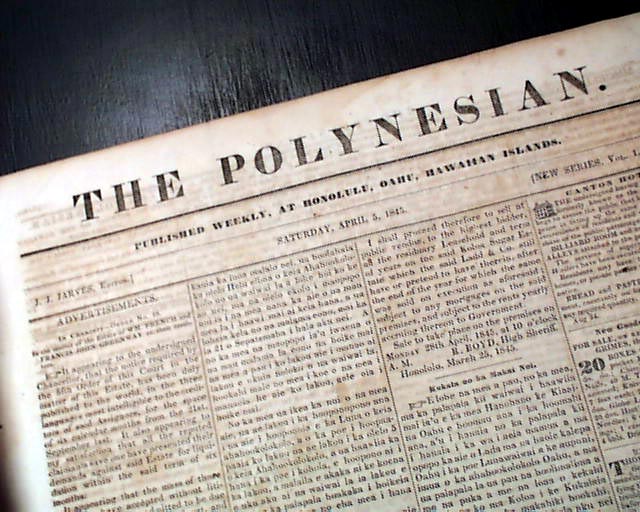 
THE POLYNESIAN, Honolulu, Oahu, Hawaiian Islands, April 5, 1845  One of the earliest newspapers we have offered from Hawaii, and fourteen years earlier than the few of this title we offered in recent years.
The "first series" of this title existed for just 1 1/2 years from 1840 to 1841. It proved unprofitable and was shut down. The editor reestablished the paper under the same title in May, 1844. Two months later it become the "Official Journal of the Hawaiian Government" and remained so until 1861. The Polynesian was the leading paper on Oahu in the mid-1800's. Issues of this era very rarely surface.
This is issue #46 under the "new series". The front page begins with a legal notice concerning an estate which is in both the English and Hawaiian languages. Another Hawaiian language article on the ftpg as well.
Pages 2 and 3 have various articles including some local events. Page 4 is mostly taken up with advertisements and public notices including one from "Monterey, Upper California" concerning whale ships and trade.
Four pages, 12 by 18 inches, a bit of minor damp staining, nice condition.