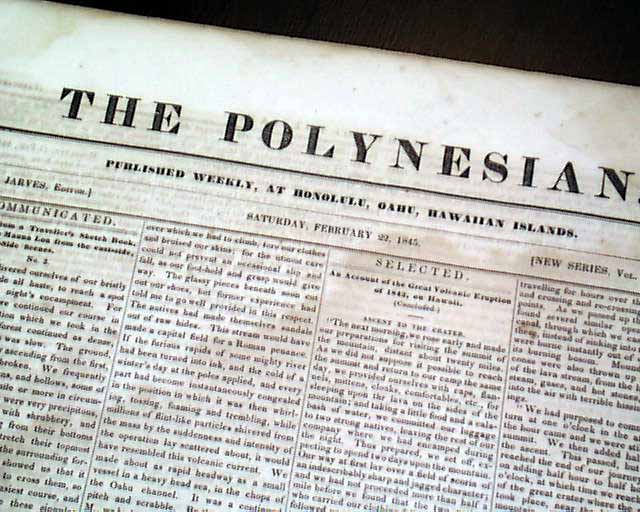 One of the earliest newspapers we have offered from Hawaii, and fourteen years earlier than the few of this title we offered in recent years.
The "first series" of this title existed for just 1 1/2 years from 1840 to 1841. It proved unprofitable and was shut down. The editor reestablished the paper under the same title in May, 1844. Two months later it become the "Official Journal of the Hawaiian Government" and remained so until 1861. The Polynesian was the leading paper on Oahu in the mid-1800's. Issues of this era very rarely surface.
This is issue #40 under the "new series". Half of the front page is taken up with a wonderful exploration report being #3 in a series titled: "Extracts from a Traveler's Sketch Book. A Trip to Mauna Loa from the East-side, and Way-Side Scenes".
Also on the ftpg. is the conclusion of: "An Account of the Great Volcanic Eruption of 1843 on Hawaii".
Page 2 has a letter from Waioli beginning: "It seems almost intolerable to you of the metropolis to wait two or three months for news from our father-land, and if, perchance, compelled to look, day after day, and week after week, for a vessel around the cape...".
Pages 3 and 4 have various news reports, notices, and advertisements including at least five in the Hawaiian language.
Four pages, 12 by 18 inches, some light damp staining, good condition.