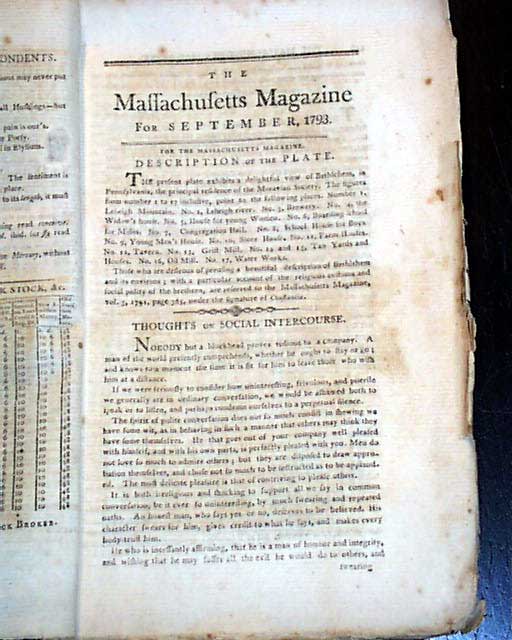 Item # 667744 THE MASSACHUSETTS MAGAZINE, Boston, September, 1793  The front page has: "Thoughts On Social Intercourse" the text beginning: "Nobody but a blockhead proves tedious to a company. A man of the world presently comprehends whether he ought to stay or go; and knows too a moment the time it is fit for him to leave those who wish him at a distance..."with much more. The balance of the issue has an eclectic selection of articles including; "Description of Madrid" "Apology for Wrestling" and "Description of the Camel" amongst any more.
Near the back is news of the day headed: "Domestick Ocurrences" with various tops including: "Northern Indians" which begins: "...arrived at the war office from the Commissioners for treating with the Indians North of the Ohio. We learn that they are not even able to effect a meeting with the body of the hostile Indians who are assembled at the rapids of the Miami river...". Another item headed: "Curious Carriage" begins: "Mr. Blanchard of Philadelphia has invented a carriage which runs without the assistance of horses..." with further details.
Lacking the plate called for.
Complete in 64 pages, full title/contents page with wide, never-trimmed margins, 5 3/4 by 9 inches, very nice condition.