Home > Back to Search Results > Letter from Ben Franklin on the Shays' Rebellion...
Click image to enlarge 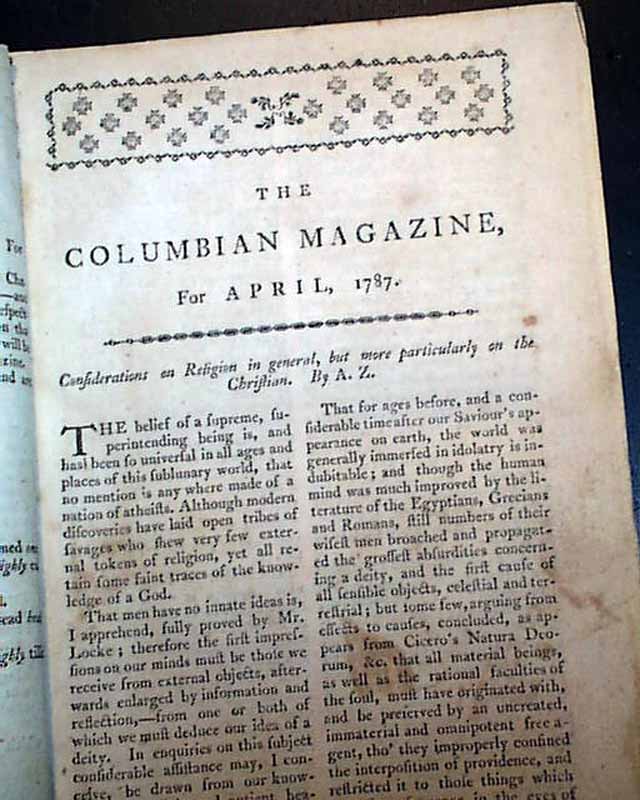 Letter from Ben Franklin on the Shays' Rebellion...

THE COLUMBIAN MAGAZINE, Philadelphia, April, 1787
Among the articles within are: "Considerations on Religion in General" "Plan for Establishing Schools in a New Country..." which takes over 3 1/2 pages; "Of Dreaming" "Comparative View of the Animals of America and those of Europe..." which is "Extracted from Mr. Jefferson's Notes on Virginia", being Thomas Jefferson; "Nitidia'a Defence of Women and White-Washing" and much more.
Near the back is "Intelligence" which has the latest news reports of the day, which includes a lengthy letter signed in type by: B. Franklin, as president of the Penna. Executive Council, to the governor of Massachusetts concerning the capture of those involved in the Shays' Rebellion.
Further on is more on the Shays' Rebellion. Also a report showing the John Hancock has won the position of governor of Mass. Also an article from Congress on the reductions in expenses required of the government, setting the new salaries for various posts. A lengthy report from Philadelphia notes the work of the Pa. General Assembly, which includes: "...a supplement to the act entitled, an act appointing deputies to the convention to be held in the city of Philadelphia for the purpose of revising the federal constitution...".
Lacking the plate & meteorological chart called for.
Complete in 52 pages, 5 by 8 inches, nice condition.