Home > Back to Search Results > Much on Shays' Rebellion... Call for the Constitutional Convention...
Click image to enlarge 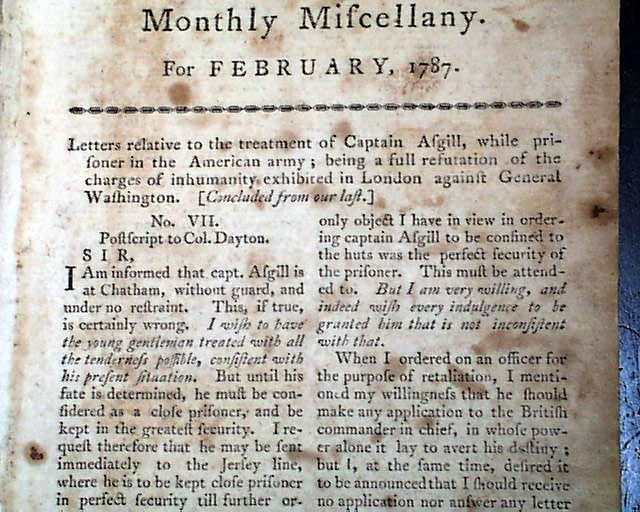 Much on Shays' Rebellion... Call for the Constitutional Convention...

THE COLUMBIAN MAGAZINE, Philadelphia, February, 1787  The issue begins with the: "Form of the Constitution of the College of Physicians of Philadelphia". Also: "Letters Relative to the Treatment of Captain Asgill while Prisoner in the American Army, being a full Refutation of the Charges of Inhumanity Exhibited in London Against General Washington" concluded from the previous issue. It takes over 2 pages & includes 5 letters each signed in type: G.Washington.
Other articles include: "Liberty" and an interesting, lengthy article o the effects of erosion to land area by the sea & rivers; "Description of Ohiopyle Falls..." by D. Rittenhouse, the plate of which is lacking.
At the back are various poems, one titled: "The Slave" & "The Genius of America". Also a section headed "Intelligence" with the latest news reports of the day including much on Shays' Rebellion, as well as a notable report concerning: "...to move in Congress for an act recommending the states composing the union that a convention...be held...for the purpose of revising the articles of confederation & perpetual union..." which was an early call for the Constitutional Convention.
Complete in 52 pages, measures 5 by 7 1/2 inches, scattered foxing, lacking the full title/contents page, nice condition.