Home > Back to Search Results > Prints of the coats-of-arms of Pennsylvania & New Jersey...
Click image to enlarge 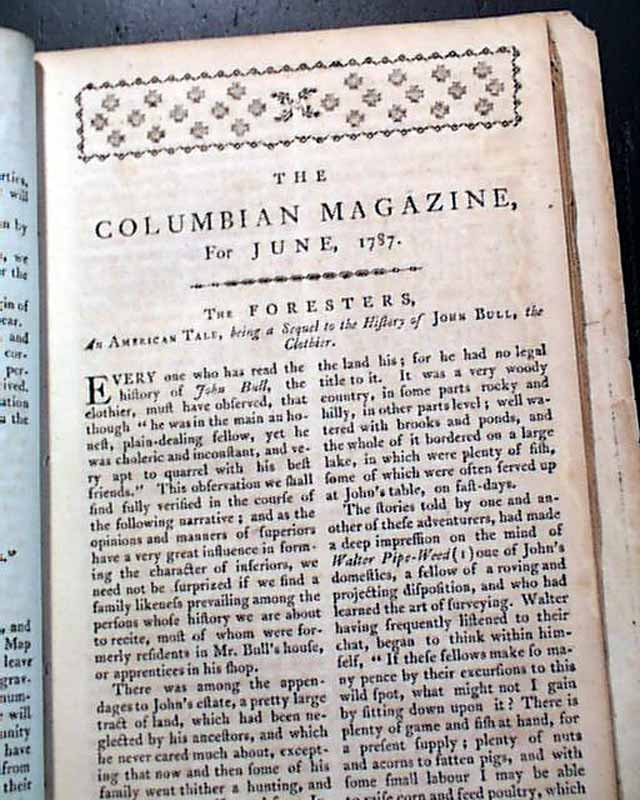 Prints of the coats-of-arms of Pennsylvania & New Jersey...

Quite rare that this issue still contains both of the full page plates called for. One is: "Plan of a New Machine for Raising Water by Wind" which has an accompanying article.
The other is quite significant showing the: "Armorial Bearing of the State of Pennsylvania" as well as the "Armorial Bearing of the State of New Jersey" with accompanying text.
Articles within include: "The Analogy between the Respective forms of Government & the Origins of the Several States of North America..." "The State of Slavery in Virginia & Other Parts of the Continent, from the Marquis de Chastellex's Travels in America" & much more.
Near the back is the: "Intelligence" with the latest news reports of the day. There is mention of Congress contracting with Mr. James Jarvis to create copper coins; the sale of the "...residue of the federal lands surveyed in the western country, the price not less than one dollar per acre...", mention that "...the artillery and infantry companies of this city were reviewed upon the common by his excellency gen. Washington...and many other gentlemen members of the federal convention."
Note that two leaves near the back, containing only poetry, are present in photocopy.
Present also is the foldout "Meteorological Observations" chart.
Complete in 60 pages, 4 3/4 by 8 inches, nice condition.