Home > Back to Search Results > With the plate of the Juniata River...
Click image to enlarge 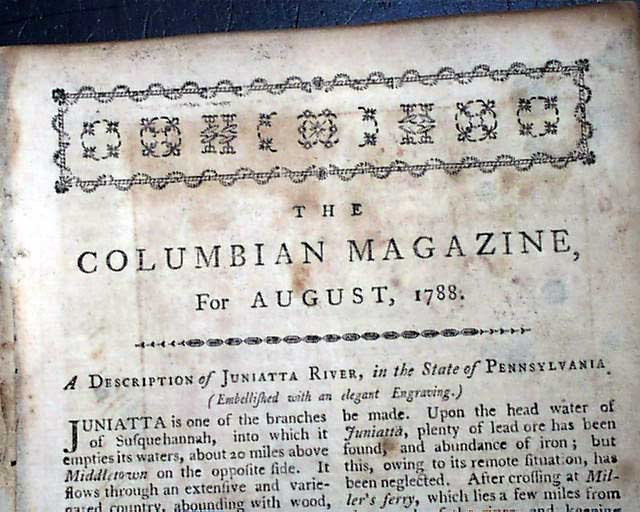 With the plate of the Juniata River...

Item # 667450 THE COLUMBIAN MAGAZINE, Philadelphia, August, 1788  This title has the honor of being the first successful American magazine, having begun in September, 1786 and lasting until December, 1792.
Among the various articles are: "A Description of the River Juniatta" "An Account of the Foundation of New Smyrna in Florida & a Remarkable Insurrection in that Settlement" "Of the Bastille..." "A Diverting Instance of Indian Retaliation" "The Introduction of the Slave Trade into England" "British Thoughts on a Commercial Treaty with America" and so much more.
Near the back is "Intelligence" which has the latest news reports of the day from both America and various European cities. A letter from Hillsborough, North Carolina, begins: "The state of Franklin is come to an end & governor Sevier gone off with about 40 adherents...". There is also discussion from N. Carolina on their new constitution.
Of significance is the presence of both of the full page plates called for, as more normally plates from 18th century magazines have been removed years ago.
One is a nice: "View on the Juanita River" and the other: "An Engraving of American Fossils". Both plates have minor foxing.
Complete in 60 pages, 4 1/2 by 7 5/8 inches, full title/contents page, scattered foxing, good condition.