Home > Back to Search Results > Witchcraft in New Jersey... First issue of this title...
Click image to enlarge 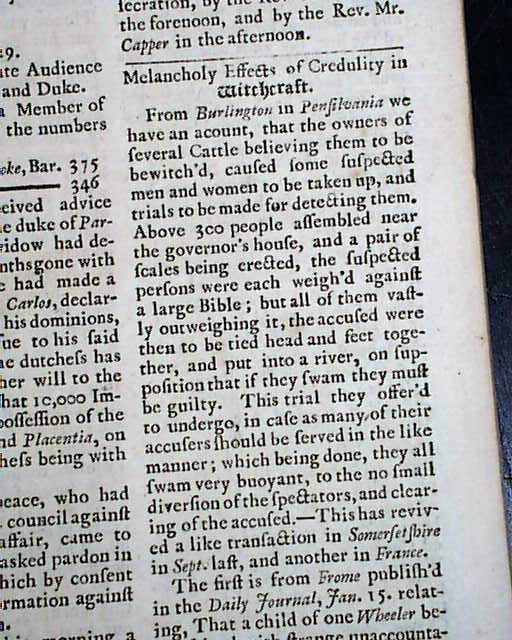 Witchcraft in New Jersey... First issue of this title...

Item # 667423 THE GENTLEMAN'S MAGAZINE, London, January, 1731  A quite rare issue as this is the volume one, number one issue--the very first issue of this magazine, and the very first publication to use the word "magazine" in the title.
This issue contains a wide variety of content including literary items, Parliamentary affairs, news reports, various essays, and other tidbits. But perhaps the most intriguing is an article titled "Of Credulity in Witchcraft", with a report from Burlington, New Jersey, which states in part: "... the accused were then to be tied Head and Feet together, and put into the river, on Supposition that if they swam they must be guilty...".
Although reported here as fact, there are several websites on this event which note it as a hoax, particularly since it originated in Ben Franklin's 'Pennsylvania Gazette'. Franklin had a predilection for press hoaxes. A fascinating article nonetheless, some 50 years after the Salem witch trials.
Note: This is the "second edition" as noted on the title page & was printed in the early 1730's. First editions of the very first issue are almost impossible to come by, and more typically we find 5th of 6th editions.
Full title/contents page featuring an engraving of St. John's Gate, 5 by 8 inches, complete in 48 pages, very nice condition.