Home > Back to Search Results > Lengthy Judaica item, plus the founding of Georgia...
Click image to enlarge 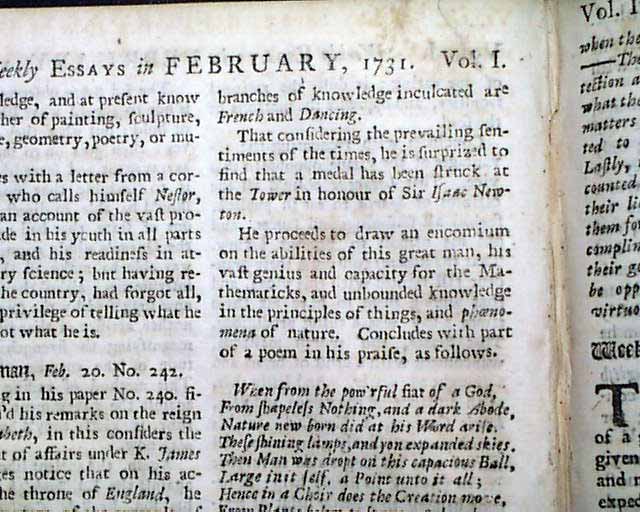 Lengthy Judaica item, plus the founding of Georgia...

Item # 667380 THE GENTLEMAN'S MAGAZINE, London, February, 1731  There are several notable articles in this issue, including over a full page on: "...an Historical and Law-Treatise Against Jews and Judaism, published some years since."
Another significant item is one of the earliest reports to be had on what would be the creation of the Georgia colony, headed: "A true Account of a new Colony about to be Establish'd in America by several Noblemen, Gentlemen, and Merchants." taking over half a page.
An interesting and early conjuring item mentions Mr. (Isaac) Fawkes, the magician, with: "The Algerine ambassadors sent to see Mr. Fawkes, who at their request shew'd them a prospect of Algier & rais'd up an apple tree which bore ripe apples in less than a minute's time..." with a bit more.
A smaller report makes mention of a medal being struck in honor of Sir Isaac Newton & includes a poem to him.
At this early date there were no maps or plates.
Complete in 44 pages, 5 by 8 inches, but lacking the full title/contents page.

Note: this is almost assurdly a later edition but printed at some point in the 1730's. Such later editions are very typical of this first year of publication, in fact first editions are extremely rare & seldom found.

This was the very first periodical to use the word "magazine" in its title, and also the very first general interest magazine in the world--and this is just the second issue published from the very first year of its existence.  This title began in 1731 and ran through 1907.