Home > Back to Search Results > A theatrical review of John Wilkes Booth & his brothers...
Click image to enlarge 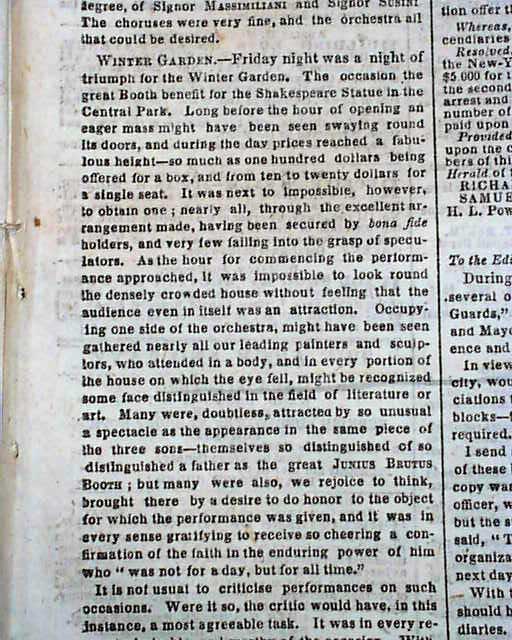 A theatrical review of John Wilkes Booth & his brothers...

Although the front page and pages within contain various reports on the Civil War, perhaps the most intriguing item is a somewhat inconspicuous page 5 review of a theatrical performance at the Winter Garden theater.
A one night performance was set for November 25 to benefit the Shakespeare Statue Fund. The performance featured the three Booth brothers, well known in the theatrical community: Junius, Edwin, and John Wilkes. This was the only time that the Booth brothers would appear on stage together. Although an advertisement for the performance appeared in several issues, the review, logically, appeared in only one. See the photo for the full text of the review with mention of all three Booth men. Of John Wilkes Booth one comment notes: "...and that of Mr. John W. Booth, an elan & fire which at times fairly electrifies the audience & whirls them along with him..." (see).
Of course little did anyone know that less than five months later John Wilkes Booth would become one the more infamous names in American history with his assassination of Abraham Lincoln at Ford's Theatre in Washington, D.C.
Complete in 8 pages, nice condition.