Home > Back to Search Results > Ben Franklin letter, & more on the growing difficulties between America and England...
Click image to enlarge 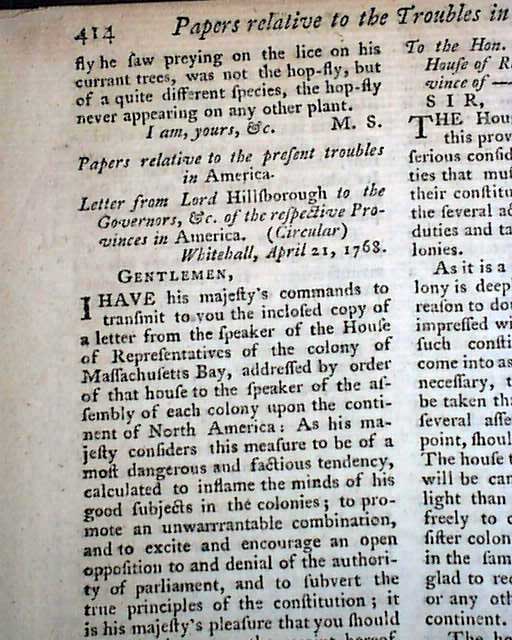 Ben Franklin letter, & more on the growing difficulties between America and England...

THE GENTLEMAN'S MAGAZINE, London, September, 1768  There is much fine content concerning the strained relationship between England & her American colonies at this time, not long after the repeal of the Stamp Act & the enactment of various other taxes on the colonies.
Among them is a circular letter: "Papers Relative to the Troubles in America" which has a letter from Lord Hillsborough to the governors of the colonies, which is a response to one from the Massachusetts Assembly to the other colonies, taking more than a full page.
There is also a response from the Maryland Assembly to Lord Hillsborough's letter which includes: "...it is very alarming to find that at a time when the people of America think themselves aggrieved by the late acts of parliament, imposing taxes on them for the sole & express purpose of raising a revenue..." with much more. This is responded to as well.
Yet another--and significant--pair of exchanges are from Benjamin Franklin to" Mr  Dennys De Berdt, Agent for the General Assembly of the Province of Massachusetts Bay", signed: The Public. The letter questions why a petition from the Mass. Assembly was not presented to the King, etc. The website will corroborate this letter is by Ben Franklin.
More letters follow, including one by "...Mr. Dickinson, Author of the Farmer's Letters." which includes: "...what answer shall be returned to our brethren of Boston & New York...whether we will unite with them in stopping the importation of goods from Great Britain; until certain acts of parliament are repealed which are thought to be injurious to our rights..." with much more, taking over 2 pages. It ends with: "...Let us never forget that our strength depends on our union & our liberty on our strength. United we conquer, divided we die." This is followed by "A Letter from a Gentleman in London to his Friend at Boston".
Inside the title/contents have has much on "Corsican News" noting: "The war between the Corsicans & the French is now commenced in Earnest...".
The full page plate called for is present.
Complete in 48 pages, 5 by 8 inches with a full title/contents page featuring an engraving of St. John's Gate, very nice condition.