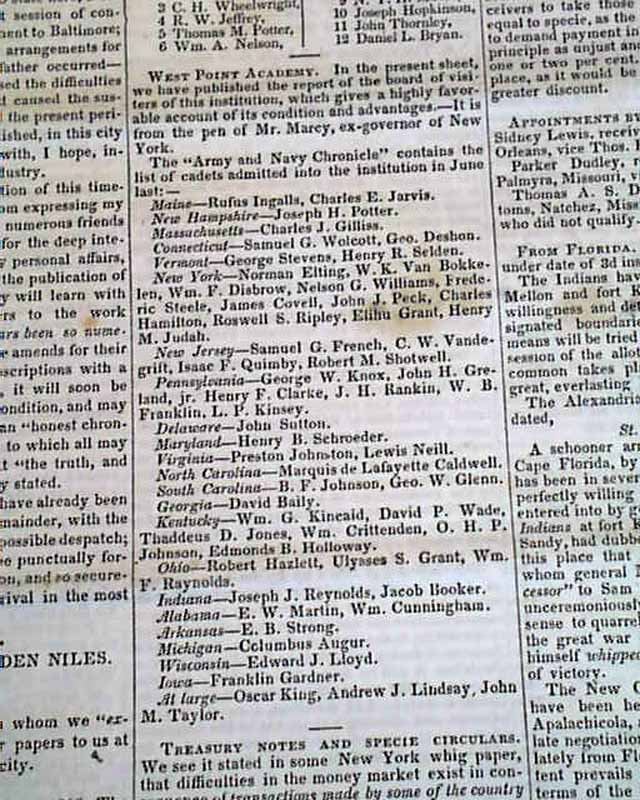 NILES' NATIONAL REGISTER, Baltimore, July 20, 1839  A fascinating and extremely early mention of Ulysses S. Grant, as the front page contains a "...list of cadets admitted into the institution in June last:..." and what follows are those admitted from each of the states amongst including: "Ohio--Robert Hazlett, Ulysses S. Grant, Wm. F. Raynolds...".
Grant would graduate from West Point in 1843, ranking 21st in a class of 39. At the academy, he established a reputation as a fearless and expert horseman.
Great to have such an early mention of Grant long before he would become a household name in American history, and also great to have on the front page.
The back page has an item: "Mormon Troubles in Illinois" which notes: "...Some of the inhabitants of that county--many of them said to be old residents--embraced the Mormon faith...while pursuing their ordinary avocation were beset by a mob & assaults committed upon them..." with more.
Among other articles in this issue are: "The Colonization Cause" concerning the settlement in Liberia; "The Character of Washington" "Military Academy" "Creek Reservations" "Thomas H. Benton", a list of promotions in the military, and much more.
Sixteen pages, 8 1/2 by 11 3/4 inches, very nice condition.