Home > Back to Search Results > "Trail of Tears"... Abolishing slavery in Virginia...
Click image to enlarge 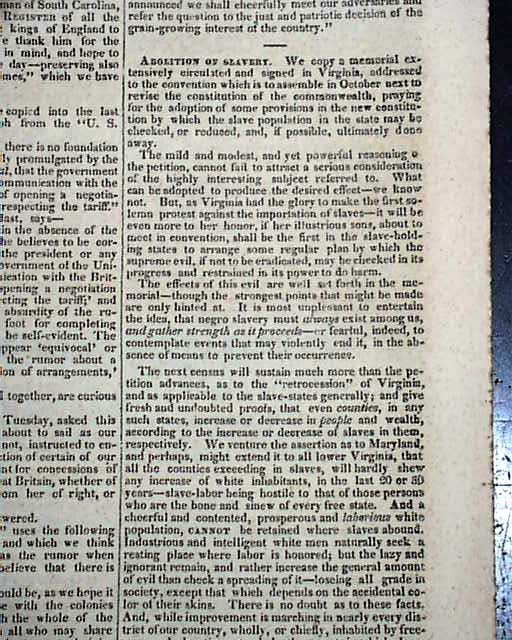 * Abolition of slavery in Virginia
* Trail of Tears - Southeastern Indians

Nearly half of the ftpg. is taken up with: "Abolition of Slavery" which concerns Virginia, noting: "...revise the constitution of the commonwealth, praying for the adoption of some provisions in the new constitution by which the slave population in the state may be checked, or reduced, and, if possible, ultimately done away...".
Similarly, an inside page has most of 2 pages taken up with: "Abolition Of Slavery" in Virginia.
Also inside is a nice report concerning the Trail Of Tears headed: "Indians Removed Westward" with a dateline of New Echota (Ga.) including: "...any attention to the progress of Indian emigration will recollect that the country at the west is highly extolled by the officers of the U. States as being suitable, in every respect, for Indian habitation...the Creeks...and the  Choctaws and  Chickasaws who have explored it, are pleased with it, & prefer it to their old homes..." with much more.
Sixteen pages, 6 1/4 by 9 3/4 inches, very nice condition.