Home > Back to Search Results > Anti-Catholic sentiment... Much on the Jacobite Rebellion...
Click image to enlarge 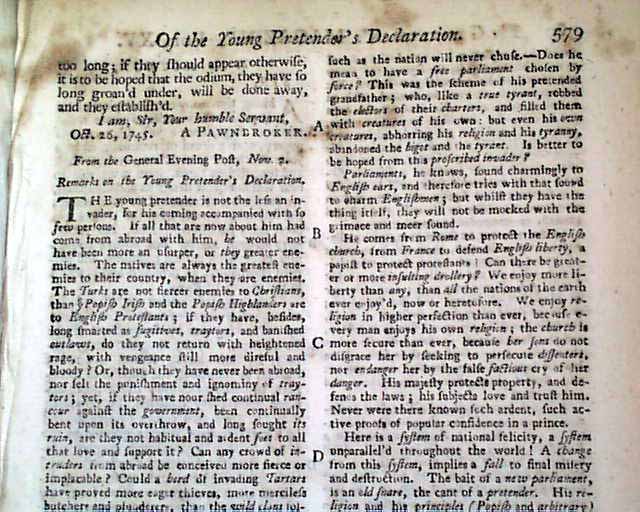 Anti-Catholic sentiment... Much on the Jacobite Rebellion...

Item # 667110
THE GENTLEMAN'S MAGAZINE, London, England, November, 1745  There is a tremendous amount of content concerning the Jacobite Rebellion with articles: "A Short Account of the Rebellion in 1715 continued" "Remarks on the Young Pretender's Declaration" and further on: "Progress of the Rebels" which takes 3 pages, and "Carlisle Taken by the Rebels". The "Historical Chronicle" near the back also has news of the Rebellion including: "An Account of the Taking of Carlisle by an Eye Witness".
Much anti-Catholic content also as found in: "Popery Destructive to Civil Rights" "Popery Worse than Atheism" "Process against Galileo For Heresy" and "A Discourse on Popery".
Over 9 pages at the beginning of the issue are taken up with reports on events in Parliament under the guise of: "Proceedings & Debates in the Senate of Lilliput" as direct reporting on Parliamentary events was prohibited, and near the back is the "Historical Chronicle" which has various news reports from throughout Europe.
No plates or maps are called for.
Complete in 56 pages, full title/contents page featuring an engraving of St. John's Gate.  Measures 5 by 8 inches, very nice condition.