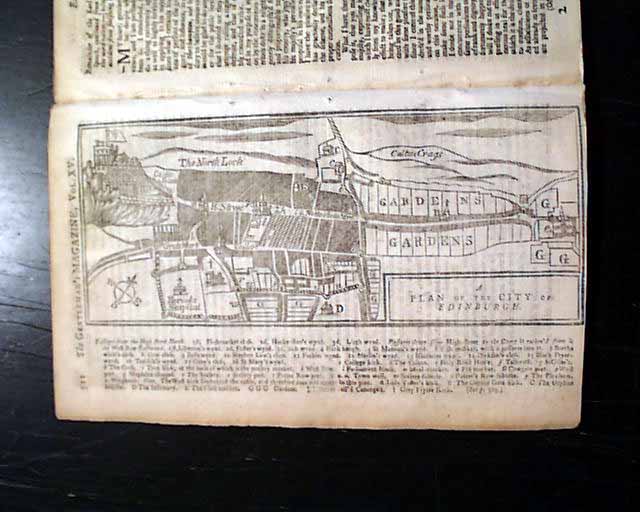 Item # 667108
THE GENTLEMAN'S MAGAZINE, London, October, 1745  A highlight of this issue is the interesting and unusual full page engraving of: "A Plan of the City of Edinburgh" which has much detail, showing the castle as well, and includes a rather large key to various locations as well. Further on is a very detailed article: "Description of the City of Edinburgh".
Another significant item is the very early printing of the United Kingdom's national anthem "God Save The King" headed: "A Song for Two Voices...". The earliest printing of this song was in 1744. This edition is just one year later.
There is much text on: "The Rebels Account of the Battle of Gladsmuir" and "Journal of Sir John Cope's Army" which includes a full page engraving headed: "Plan of the Battle of Gladsmuir". This print is hand tinted. Rarely found as such.
Near the back under the: "List of Deaths..." is that of Jonathan Swift, a portion including: "At three o'clock...dyed that great & eminent patriot the Rev. Dr. Jonathan Swift...whose genius works, learning & charity are universally admired...the bulk of his fortune...to build & endow an hospital for lunaticks, idiots and incurables...".
No maps or plates are called for.
Complete in 56 pages, full title/contents page with an engraving of St. John's Gate, 5 by 8 inches, great condition.