Home > Back to Search Results > Number three on the "top ten" list of Supreme Court decisions...
Click image to enlarge 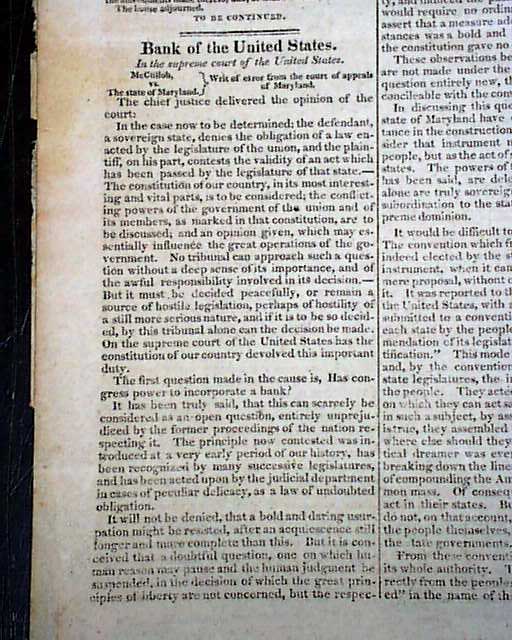 Close to eight pages of this issue are taken up with what one website lists as number 3 of "The Ten Most Significant Supreme Court Decisions Of All Time" (#2 is Roe vs. Wade; #1 is the Dred Scott Decision).
This is the case of McCulloch vs. the state Maryland, the text headed: "Bank of the United States - In the Supreme Court of the United States", with the lengthy text containing the Chief Justice's opinion, he being John Marshall. This landmark decision concerns the right of Maryland to tax a branch of the federal bank operating within its borders. This fundamental case established the following two principles: 1) that the Constitution grants to Congress implied powers for implementing the Constitution's express powers in order to create a functional national government and: 2) that state action may not impede valid constitutional exercises of power by the federal government.
Nice to have this report in a newspaper so close to Washington, D.C.
Sixteen pages, 6 1/4 by 9 1/2 inches, very nice condition.