Home > Back to Search Results > A pair of issues questions: is Thomas Jefferson an infidel?
Click image to enlarge 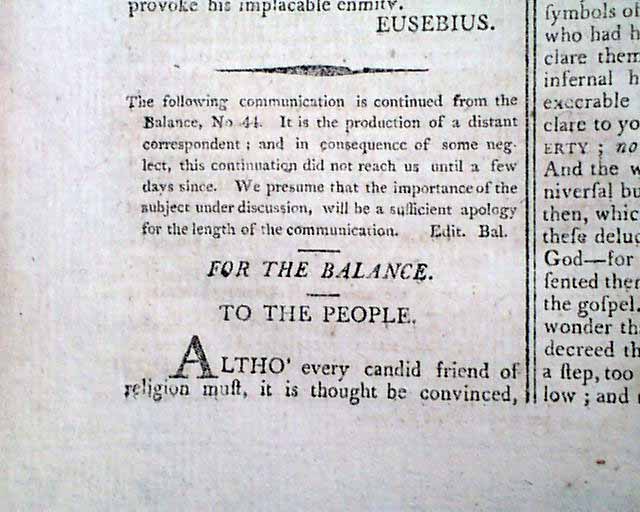 A pair of issues questions: is Thomas Jefferson an infidel?

Page 2 of the 14th has an interesting article taking most of the page, concluding in the 21st, which reports on the spirituality of Thomas Jefferson.
A few bits include: "Altho' every candid friend of religion must, it is thought be convinced, from Mr. Jefferson's own writings, that he is an infidel...foreigner was riding with him in Virginia 7 observing a decayed building inquired what it was? Mr. Jefferson answered, 'a church'. Do you suffer your churches, said the gentleman, to decay i this manner; why, sir, it looks like a barn. I', replied Jefferson 'it is good enough for a God who was born in a manger!!..." and further on: "...Let me now proceed to propose some of the reasons by which I have been convinced that Thomas Jefferson would be pleased with the overthrow of christianity in this country..." and much, much more.
The 14th also has nearly a full page taken up with a letter signed in type: Thomas Paine, prefaced in part with: "We shall not often soil the pages of the Balance with the writings of Thomas Paine: but to give a specimen of his manner of writing since his late  arrival to this country...".
Each issue has 8 pages, 9 12 by 11 inches, very nice condition.