Home > Back to Search Results > The actions of General Washington, and more...
Click image to enlarge 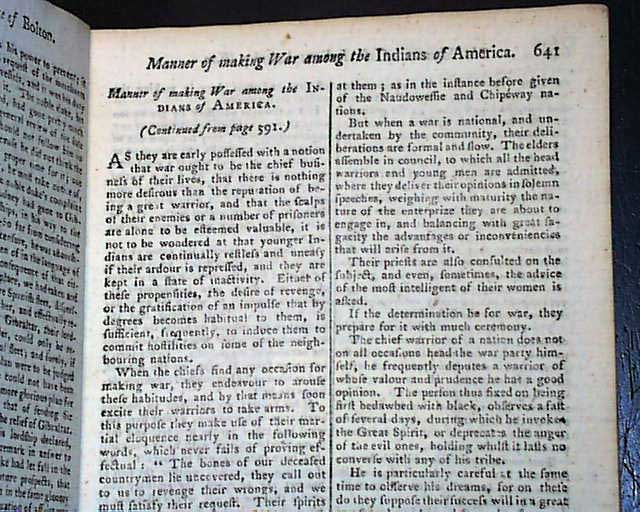 The actions of General Washington, and more...

Over 3 pages are taken up with "Manner of Making War  Among the Indians of America" concluded in a future issue.
Also: "A Short Account of Jamaica and its Inhabitants" is datelines from Kingston and takes 2 1/2 pages.
Near the back is a letter from Henry Clinton to Lord George Germaine dated at New York in which he details a number of recent battle & war-related events. Included is: "...Washington has not as yet detached single  man to the southward; and by all accounts from General Arnold, Gates cannot have  above 800 continental troops...General Washington still remains at or near Tappan..." with more.
Then a letter from major-general Phillips to Germaine, also dated at New York with more fine war content.
Almost half of the back page has reports headed: "America" with datelines from South Carolina and New York. Masking tape at the spine covers a few letters in this report bot does not cause loss of readability.
The plates called for are lacking.
Complete in 56 pages, 5 by 8 1/4 inches, full title/contents page, masking tape at the spine, nice condition.