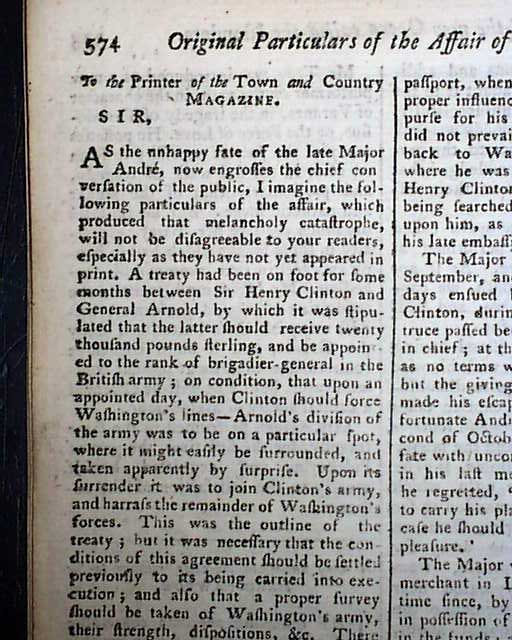 
THE TOWN & C0UNTRY MAGAZINE, London, November, 1780  Included is: "Manner of Making War Among the Indians of America" which takes over a full pate, continued in a future issue.
Some fine content on the Benedict Arnold treason plot, with much on Major Andre as well.
One article begins: "As the unhappy fate of the late Major Andre now engrosses the chief conversation of the public, I imagine the following particulars of the affair, which produced that melancholy catastrophe, will not be disagreeable to your readers...". Included are fine details including: "...A treaty had been on foot for some months between Sir Henry Clinton and General Arnold, by which...the latter should receive 20,000 pounds sterling & be appointed to the rank of brigadier-general in the British army, on condition, that upon an appointed day when Clinton should force Washington's lines--Arnold's division of the army was to be on a particular spot where it  might easily be surrounded and taken apparently by surprise..." with  much more including: "...as no terms would satisfy Washington but the giving up of Arnold, who had made his escape to New York, the unfortunate Andre was sacrificed on the second of October...said in his last moments, there was nothing he regretted, 'but not having been able to carry his plan into execution...".
This is followed nearly two pages taken up with: "As the Famous Gen. Arnold has abandoned the Rebel Service & Joined our Army at New York, we present our Readers with his Address to the Inhabitants of America..." which is great reading and signed in type: B. Arnold.
Near the back are several war reports beginning: "...The desertion of general Arnold and the unfortunate fate of major Andre, were equally unexpected and astonishing..." with more.
The plates called for are lacking.
Complete in 56 pages, 5 by 8 1/2 inches, full title/contents page, masking tape at the spine, nice condition.