Home > Back to Search Results > New York is thankful for repealing the Stamp Act...
Click image to enlarge 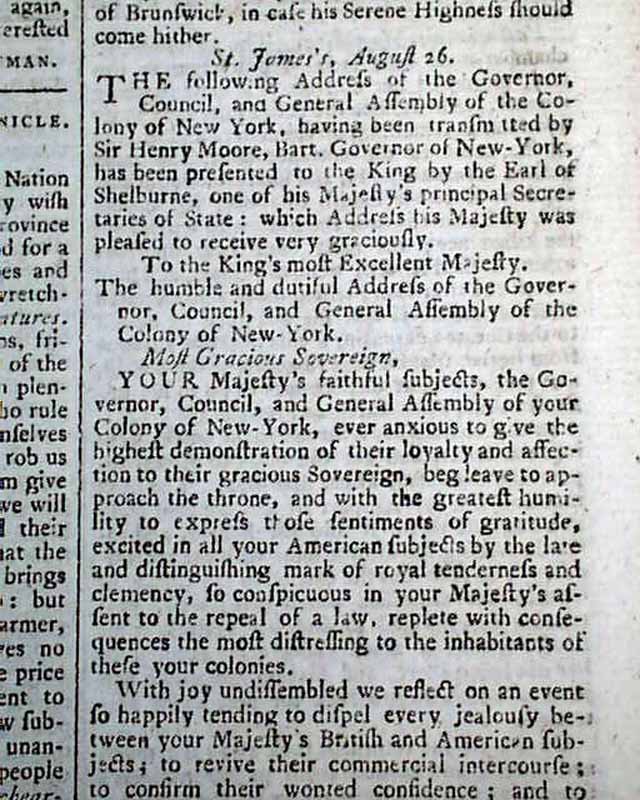 New York is thankful for repealing the Stamp Act...

* The Repeal of the Stamp Act
* Celebration in New York

The ftpg. has most of a column taken up with an address of the governor of New York to the King. The focus is on thanking him for repealing the hated Stamp Act, one bit noting: "...to express those sentiments of gratuitous excited in all your American subjects by the late...mark of royal tenderness and clemency so conspicuous in your Majesty's assent to the repeal of a law replete with consequences the most distressing to the inhabitants of these your colonies...".
Page 2 has two reports headed: "America" mentioning the passage of several acts relating to the colonies, plus an: "Extract of a letter from Fort Pitt" concerning a situation with Indians.
Eight pages, 8 1/2 by 11 inches, close-trimmed at the bottom margin causes minor loss to some columns but not to mentioned reports. Otherwise nice condition.