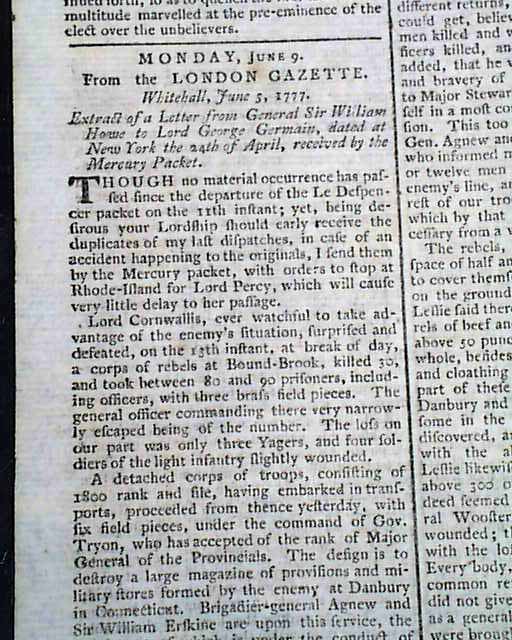 Page 2 contains an extract of: "A Letter from General Sir William Howe to Lord George Germain, dated at New York the 24th of April..." which includes: "...Lord Cornwallis, ever watchful to take advantage of the enemy's situation, surprised & defeated on the 13th instant...a corps of rebels at Bound Brook...The general officer commanding there very narrowly escaped being of the number...A detached corps of troops...embarked in transports...with six field pieces under the command of Gov. Tryon who has accepted of the rank of Major General of the Provincials. The design is to destroy a large magazine of provision & military stores formed by the enemy at Danbury in Connecticut..." with more.
Also, yet another letter taking over a full column written from "On Board the Mercury Packet, Long Island Sound, April 30, 1777" which has some excellent detail on the military operations at Danbury & the vicinity.
There is further reporting on the events near Danbury on yet another page, which also includes: "...that about 5000 of the Provincial army had deserted at different times who were then in & near New York, the major part of whom had enlisted in the royal provincial corps. It is said that the Congress have offered terms for a reconciliation with the Mother Country..." & more.
Another page has some reports under the heading "America" which includes: "...a party of about 50 men came into town from West Jersey. They fell in with a large body of the rebels with whom they had a slight skirmish in which they killed five of them..." and more, including a report of a skirmish near Bergen Town. "....We hear the commander at Ticonderoga has informed the Congress at Phila. that his garrison consists only of 1500 men...some straggling soldiers had arrived there without provisions."
Also more than a full column of reports concerning the Revolutionary War, shown in the photos & which includes: "...that Gen. Washington has issued a proclamation ordering all the provisions & forage to be removed out of the Jersies & all that is not so removed he orders to be burnt...The troops at Amboy are very sickly & many die daily of the flux...Thank God I have once more got safe from the rebels for I have been taken twice by them, the last time I was carried to Philadelphia where they die like rotten sheep...They buried 30 a night for 13 weeks that I was there...I hope Gen. Howe has got Phila. before this time...". Some items on the bkpg. as well.
Eight pages, 8 1/2 by 11 inches, very nice condition.