Home > Back to Search Results > Proclamation by General Howe...
Click image to enlarge 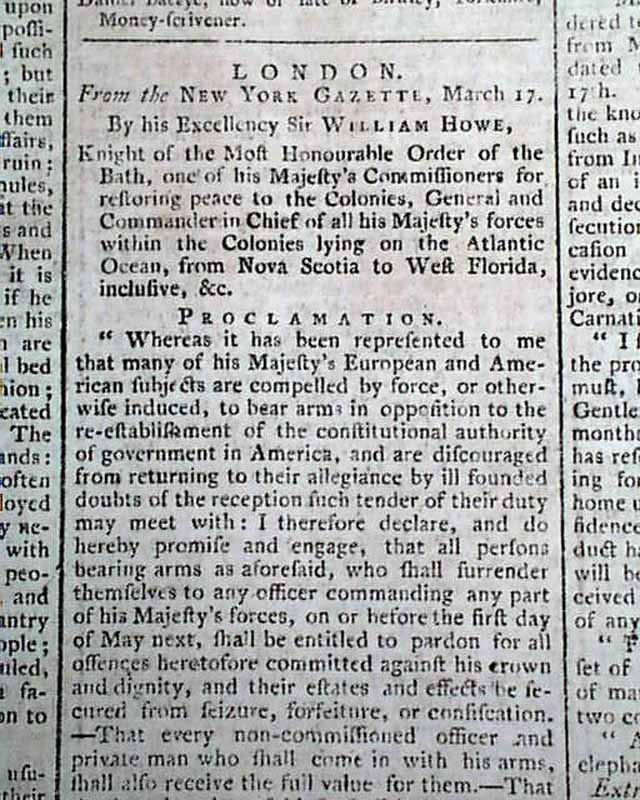 Page 2 has a report from concerning the Revolutionary War with a Proclamation signed in type by: W. Howe, which reads in part: "...declare & do hereby promise & engage that all persons bearing arms as aforesaid who shall surrender themselves to any officer commanding any part of his Majesty s forces on or before the first day of May next, shall be entitled to pardon for all offences heretofore committed against his crown & dignity...every non-commissioned officer & private man who shall come in with his arms shall also receive the full value for them..."  with more.
Page 2 also has several other war-related reports which are seen in the photos below. A report on another page includes: "The Rebel army under Washington in Morris county consists of 8000 men who diminish daily from an epidemical & camp distemper which, joined by the want of almost every necessary, produces reluctance to service & a great disposition to mutiny & desertion; these are heightened by the desperate state of their General's bad health...two deserters had brought to that city an assurance that Mr. Washington was dead..." with more.
Other bits on this page include: "Mr. John Dickinson has taken a final leave of his stadthouse confederates & retired to his estate...General Howe is in New York preparing to proceed to Jersey...The Congress have returned from Baltimore to Philadelphia...it was reported yesterday that Dr. Franklin writes to a gentleman in the city that he has received a letter from General Washington...that he then occupied every post but one from Brunswick to Amboy & that he had sufficient force with him to repel Gen. Howe & 27,000 men in or near Philadelphia." The bkpg. contains a declaration signed by the inhabitants of .
Eight pages, 8 1/2 by 11 inches, very nice condition.