Home > Back to Search Results > Much on taxation... noting the 4th of July...
Click image to enlarge 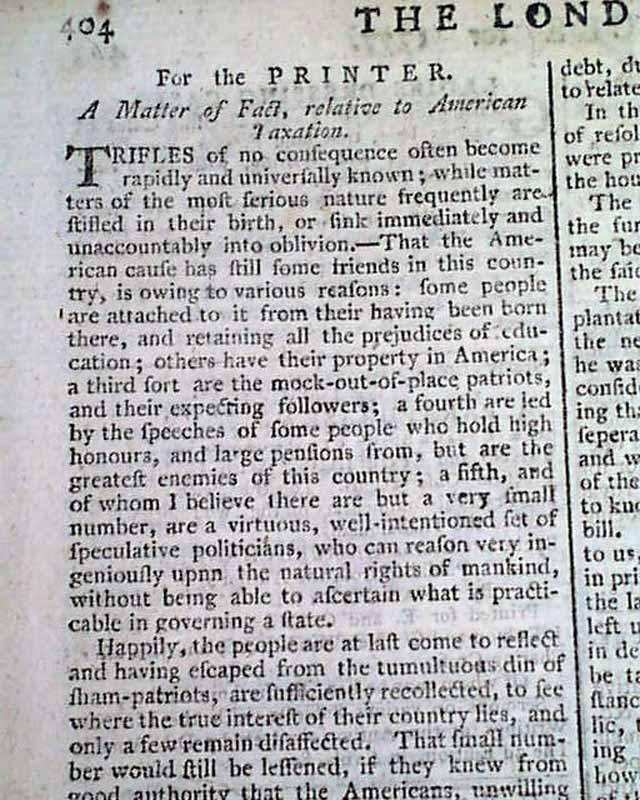 Page 3 has an item noting: "...reported so far as relate to government mention that after a large detachment of the King's troops on the island had been sent as a reinforcement to Gen. Howe's army in the Jerseys, the rebels had made several attempts to repossess themselves and drive away the King's forces...they retired without coming to action..." and a bit more.
Most of another page is taken up with: "A Matter of Fact, Relative to American Taxation" followed by: "Mr. Grenville's Offer to the Colony Assemblies to Raise the Supply themselves instead of having it done by a Parliamentary Stamp Act", both of which provide some interesting reading concerning events from 1764 to 1775.
And yet another brief item notes: "...was a prisoner in America has brought...a Boston almanack...in which the days of his Majesty's birth, accession, etc. are not marked...The year is denoted by the 'first of American Independence, which began July 4th 1776.' " And the bkpg. has a bit noting: "...the popular Mr. Dickinson, (who wrote the Farmers Letters in favour of the Americans) from the ill treatment he has received from the Congress, as declared for the king...had cut off a numerous body of the rebels & had prevented a great quantity of provisions from being sent to General Washington."
A few other tidbits as well. Eight pages, 8 1/2 by 11 1/4 inches, minor loss at a margin on two leaves affects a few letters in one mentioned article, otherwise nice condition.