Home > Back to Search Results > Asserting the Americans had no cause to go to war...
Click image to enlarge 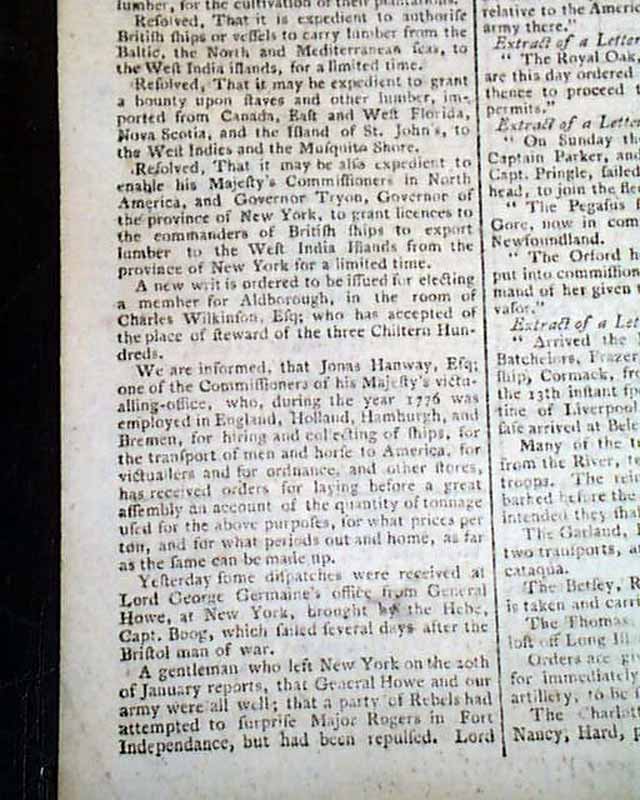 Asserting the Americans had no cause to go to war...

A page 2 item notes: "...General Howe & our army were all well; that a party of Rebels had attempted to surprise Major Rogers in Fort Independence but had been repulsed...". Another page has a lengthy letter concerning the war in the colonies, including: "...war, at the very best, even when successful, is a sore visitation; a mark of God's anger...but the rebellion of our colonies was planned & fomented by its leaders without any pretense of this nature. The colonists were not in a state of oppression...grievances indeed were pretended...in short...the Americans knew, & most of them were willing to confess, that they were the happiest of all people...enjoying the benefit of mild & equitable laws, secured by the protection of this kingdom...how then could a people, this happily situated...hazard their fortunes, their lives & their souls in such a rebellion?..." with much more on this fascinating topic.
Another pg. has a Proclamation by General Howe concerning allegiance to the British cause, which includes an oath which begins: "I do promise & declare that I will remain in a peaceable obedience to his majesty & will not take up arms...". Plus additional war-related reports on the same page including a chart noting the various distances from New York, prefaced with: "As the seat of the American war is at present in the Province of New Jersey & the distances between New York & Philadelphia are a subject of conversation...".
Eight pages, 8 1/2 by 11 inches, nice condition.