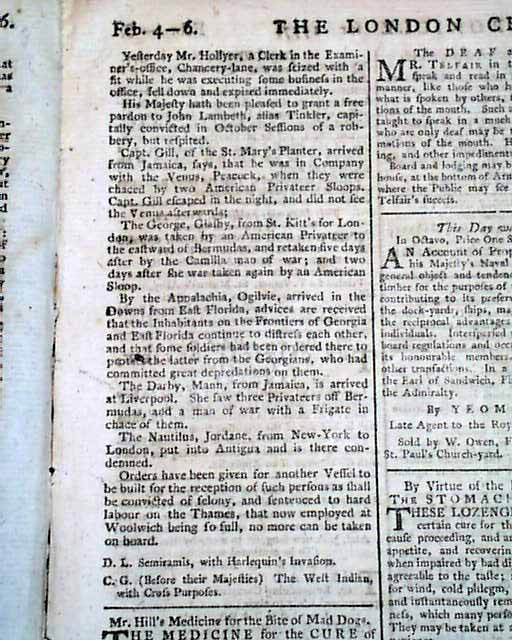 A page 3 item notes: "By the Appalachia, Ogilvie, arrived in the Downs from East Florida, advices are received that the inhabitants on the frontiers of Georgia and East Florida continue to distress each other & that some soldiers had been ordered there to protect the latter from the Georgians who had committed great depredations on them."
Another page has some bits regarding America, including: "...a few American emissaries, particularly a Maryland gentleman...that pay great attention to the hardware branches, particularly that of the foundery, musket & musket locks, from which it is supposed their country is in want; but it is to be hoped none of our citizens will be so wanting in loyalty & their country's interest as to give the least assistance to them."
The back page has some text concerning the Revolutionary War, including: "...views of the French ministry with regard to the unhappy quarrel between Great Britain & her American colonies...the French ministry intend to wait until Great Britain & America are so thoroughly exasperated against each other as to cut off all possibility of a reconciliation. Then the French will declare in favour of the latter & attack the British empire thus unhappily divided within itself..." with more.
Eight pages, 8 1/2 by 11 inches, very nice condition.