Home > Back to Search Results > Criminal career of Texas outlaw Sam Bass comes to an end...
Click image to enlarge 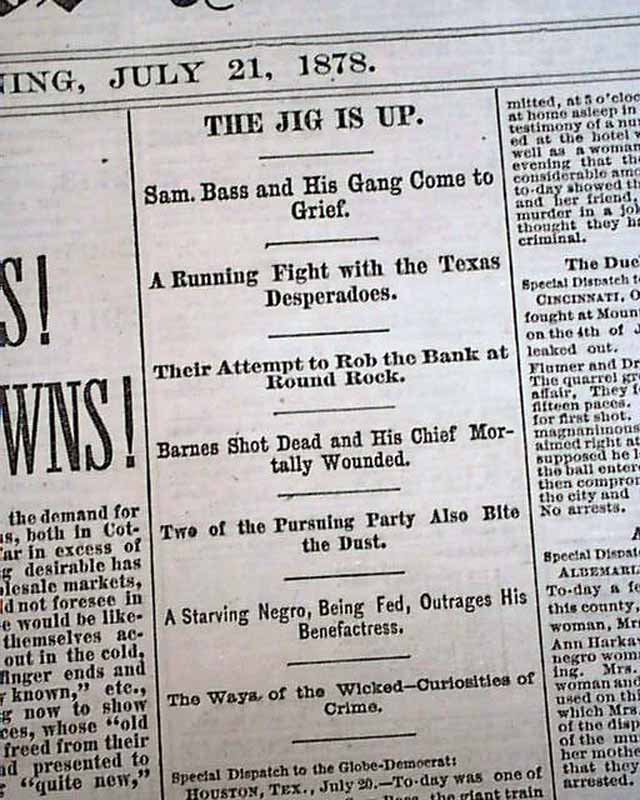 The top of the front page has column heads: "THE JIG IS UP" "Sam Bass and His Gang Come to Grief" "A Running Fight With the Texas Desperadoes" "Their Attempt to Rob to Bank at Round Rock" "Barnes Shot Dead & His Chief Mortally Wounded" "Two of the Pursuing Party Also Bite the Dust".
This is a great account of the last robbery by the infamous Texas outlaw Sam Bass, reported in two accounts, the first beginning: "To-day was one of excitement in Texas. Sam Bass, the giant train robber chief, has been captured after a severe fight in which several lives were lost..." with much more detail (see). The other report dated July 20 is headed: "The Dying Robber Refuses to Confess" and notes in part: "...received information from Jones that Bass was shot through the bowels and is dying...is thought he will die before morning...". Sam Bass would die the day this newspaper was published.
Eight pages, very nice, clean condition.