Home > Back to Search Results > Civil War map... Battle of the Wilderness...
Click image to enlarge 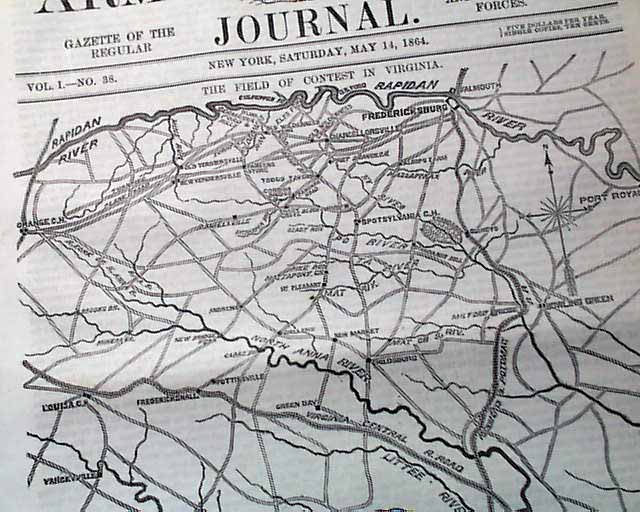 This is the: "Gazette of the Regular and Volunteer Forces" as noted in the masthead Not surprisingly the content within is almost entirely about the Civil War, and what is unusual is that most of the front page is taken up with a Civil War map headed: "The Field Of Contest In Virginia" which shows from Fredericksburg to Shannon Hill, to Hanover Court House to Port Royal. The balance of the front page is text of: "The Campaign In Virginia" which carries over to take all of pages 2, 3 and 4 including various subheads.
Page 5 has much on: "The Battle Of The Wilderness" which carries over to page 6. The balance of the issue has much on the Civil War, and near the back are various "Appointments By The President" "Rebel Reports & Comments" which includes a letter signed by: R. E. Lee; and a lengthy address headed: "Mr. Jefferson Davis's Message" signed by him in type: Jefferson Davis.
Sixteen pages, very nice condition. A great display piece as rarely did maps appear on the front page of this military newspaper.