Home > Back to Search Results > Capture of the infamous John Hunt Morgan...
Click image to enlarge 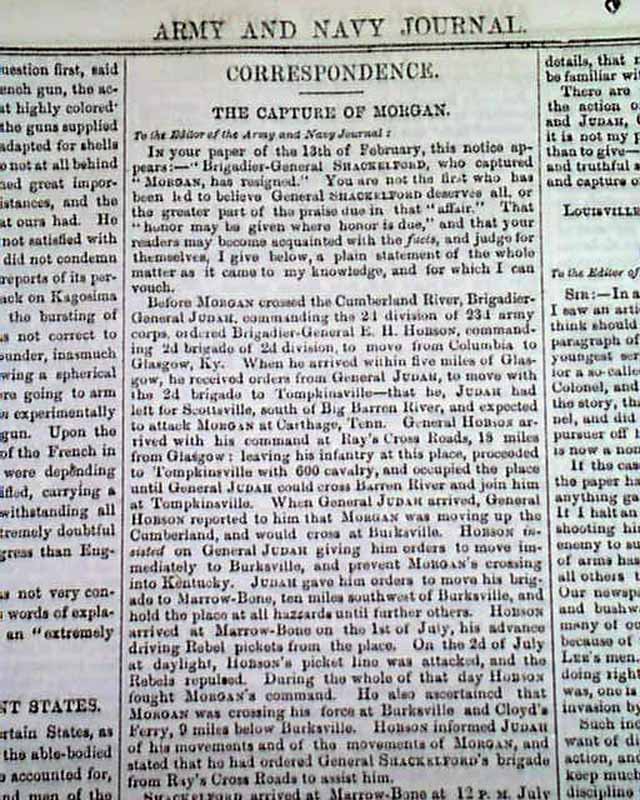 
ARMY & NAVY JOURNAL,  New York, April 9, 1864  As noted in the masthead this was the: "Gazette of The Regular & Volunteer Forces" and as such is replete with military news of all sorts.
Among the articles in this issue are: "The Capture of Morgan" which is a fine item on the taking of the infamous John Hunt Morgan, taking over one-third of the page; "Spots On the Uniform" "The Military Topography of the United States" "Deficiency of Seamen" "A Picture of the Horrors of War" "The Summary Dismissal of Officers" "The Contraband News" and more.
Among the item sunder the "Army Gazette" are "Appointments by the President" "Bounties For Substitutes" "Furloughs to Applicants For Appointments in Negro Regiments" among other documents.
Sixteen pages, 10 by 14 1/3 inches, nice eagle in the masthead, nice condition.