Home > Back to Search Results > Terrific front page from the Revolutionary War...
Click image to enlarge 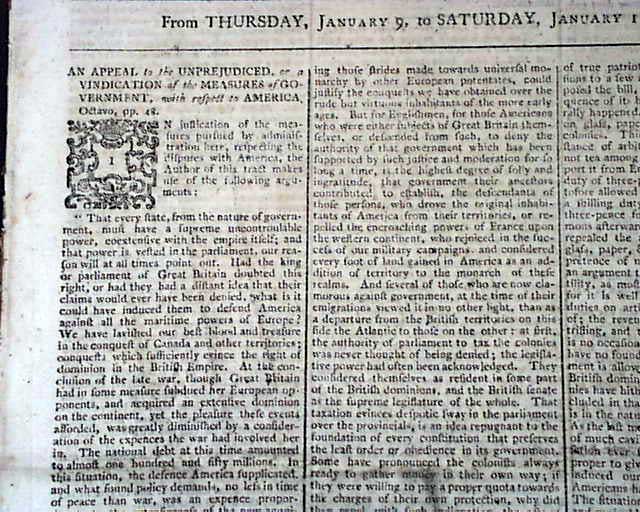 Almost the entire front page is taken up with a terrific item headed: "An Appeal to the Unprejudiced or a Vindication of the Measures of Government with Respect to America" which is a great statement on the need for the Revolutionary War. A nice issue for display as such, as one can get a sense for the feelings of the day from just the front page.
Elsewhere is a report from Paris that: "...with respect to the arrival of Dr. Franklin in that city...the King has forbidden his ministers from having any thing to do with the Doctor either directly or indirectly...on pain of disgrace & the King's indignation, to have any communication or concern with Dr. Franklin or any other American...The other account says that M. de Viomesnil...is going with several other officers & engineers to Philadelphia to be employed in the Provincial army...".
A small bit near the back notes: "Gen. Burgoyne is to set out in the spring with ten thousand men under his command on an expedition against Williamsburgh in Virginia."
Complete in 8 pages, 8 1/4 by 11 1/4 inches, some ftpg. smudges, good condition.