Home > Back to Search Results > Texas struggles for independence from Spain...
Click image to enlarge 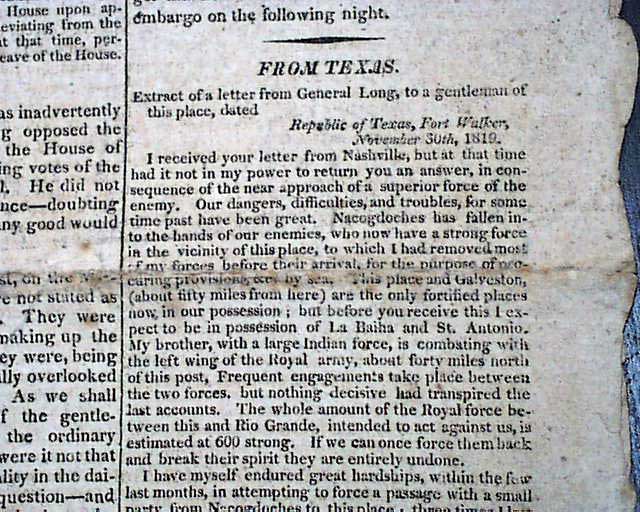 Texas struggles for independence from Spain...


NATIONAL INTELLIGENCER, Washington, D.C., March 2, 1820  The ftpg. has an early letter datelines: "Republic of Texas, Fort Walker, Nov. 30th, 1819" with the letter detailing trouble there. Bits include: "...Our dangers, difficulties & troubles...have been great. Nacogdoches has fallen into the hands of our enemies...Frequent engagements take place between the two forces...I think the enemy must have suffered considerably...General Walker was attacked & repulsed the enemy on the Rio Brassos...that the first vessel that sailed under our flag returned to Galveston...with....a few African slaves...I hope my Tennessee friends will not forget me in my present difficulties as I resolved to see Mexico free and independent, or to perish in the attempt...".
Ultimately, Texas (as part of Mexico) would gain its independence from Spain in 1821.
Four pages, good condition.