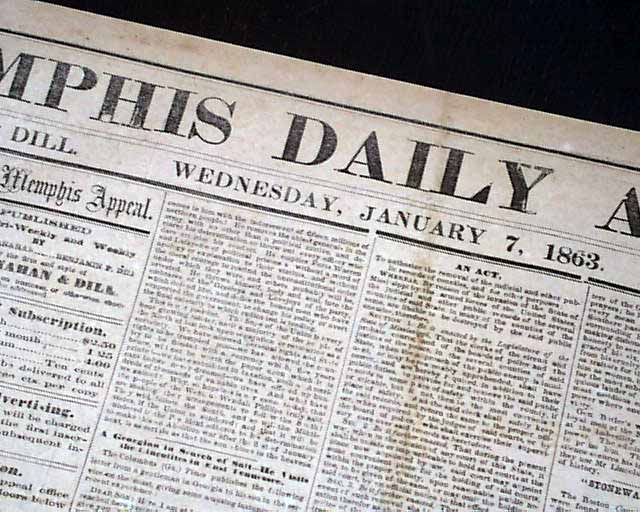 
THE MEMPHIS DAILY APPEAL, Jackson, Mississippi, January 7, 1863  This newspaper had fascinating history as it was chased around the South. Note that this "Memphis" newspaper was published in Jackson, Mississippi, and also that this is labeled the: "Army Edition" which we have not seen in other issues of this title we have offered. See the information below concerning its history.
The front page has various items relating to the on-going Civil War including three: "General Orders", "Arrest The Deserters!" "View of a Northern Radical" "Butler's Outrages in New Orleans" "Battle of Prairie Grove" "Butler's
course from a Northern Point of View--A Yankee on Yankee" "Retribution"; a poem titled: "Stonewall Jackson's Way", and more. The back page continues with a great wealth of reporting on the war, a few bits including: "Retreat of Gen. Bragg" "From Vicksburg" "Death of Capt. E.e. Wright "Federal Account of the Battle at Murfreesboro" "Hickman Evacuated--Columbus In Alarm" "Bragg Falls Back from Murfreesboro" and much, much more.
Complete as a single sheet newspaper, a very tiny worm hole affects one word, great condition.