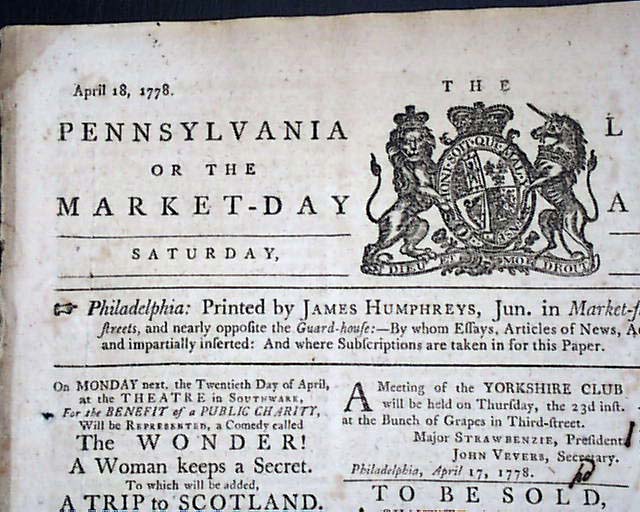 
THE PENNSYLVANIA LEDGER OR THE PHILADELPHIA MARKET-DAY ADVERTISER, April 18, 1778

This was a strongly Tory (supportive of the British cause) newspaper which began in 1775 and closed shop in May of 1778 when the British evacuated Philadelphia.
The front page is entirely taken up with ads including a "Five Pounds Reward" ad for a runaway Negro boy.
All of pg 2 is taken up with reports from London, including a lengthy: "Lord North's Speech...", prefaced with text which includes: "...A bill for declaring the intentions of the Parliament of Great Britain concerning the exercise of the right of imposing taxes on the colonies, plantations, and provinces of America...". Lord North's lengthy speech deals almost exclusively with the troubling situation in America with just a terrific amount of great content, portions of which are seen in the photos below. Some of the items include: "...The forces of Washington are not sufficient to make him quit his defensive plan...the resistance of America is greater, and the war has lasted longer than was at first apprehended..." with more. North notes 3 options: "I. To strengthen our force & continue the war upon the present plan. II. To recall it from America. III. To offer terms of conciliation to her." with further details. Plus there is so much more to the speech.
Page 3 has a bit which notes: "...party of the British light dragoons with a part of the Philadelphia light dragoons left this city & proceeded to Bristol where they surprised & took prisoners...". Much of page 3 is taken up with ads.
Over half of the back page is taken up with text on: "Draught of a Bill for declaring the intentions of the Parliament...concerning the exercise of the Right of imposing Taxes within his Majesty's colonies..." and: "Draught of a Bill to enable his Majesty to appoint Commissioners with sufficient powers to treat, consult, and agree upon the means of quieting the disorders now subsisting in certain of the Colonies...of North America" with much more text.
Four pages, light damp stain to a lower corner, numeric notations in margins next to ads (this was the editor's copy), generally very nice condition. Not surprisingly, being a Tory newspaper the masthead features an engraving of the Royal coat-of-arms.