Home > Back to Search Results > Baseball arrives in England... diagram of a diamond and more...
Click image to enlarge 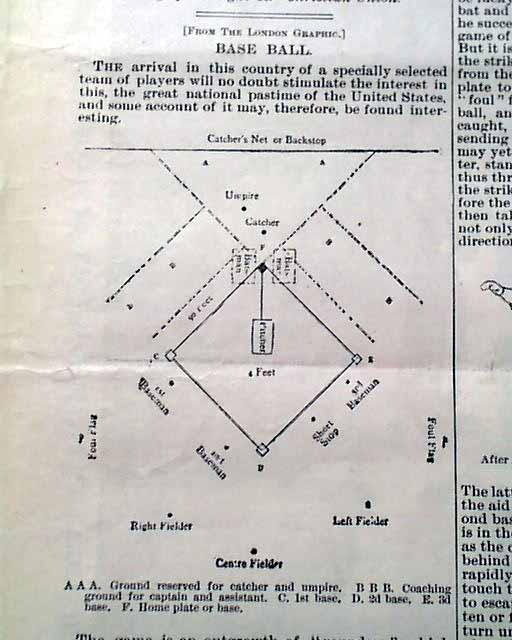 Baseball arrives in England... diagram of a diamond and more...


SCIENTIFIC AMERICAN SUPPLEMENT, New York, April 13, 1889 An inside page of this issue has an informative article about "Base Ball" that appeared in a London newspaper, beginning: "The arrival in this country of a specially selected team of players will no doubt stimulate the interest on this, the great national pastime of the United States and some account of it may, therefore, be found interesting....The game is an outgrowth of 'rounders' which might naturally be thought to be too elementary a sport to be susceptible of much scientific development. As a matter of fact, however, base ball is an exceedingly scientific game...as to exclude all but professionals...". The report continues, describing the "properties" of the game (bat, ball, bases), as well as the basic fundamentals and rules of the game, plus some talk about the popularity of the sport, stating in part that: "...The game has gained a remarkable hold upon the American people."
There is also a diagram of a baseball diamond showing the various defensive positions, as well as small illustrations of a player sliding into a base, a player batting, and one delivering a pitch. The article also mentions Capt. Ward "...in charge of the All American Nine...[and] a member of the New York Bar." There is also mention of "Ten Thousand Dollar Kelly", plus a 1 3/4 inch illustration of him. This was Mike Kelly, one of the premier players of the 19th century, and a member of the Baseball Hall of Fame. A very thorough and expertly written article, complemented by the fine diagram and the illustration of a very famous player.
Complete in 16 pages, front page margin has two mends, very nice condition.