Home > Back to Search Results > Much on the tensions with America: "God knows how this will end"...
Click image to enlarge 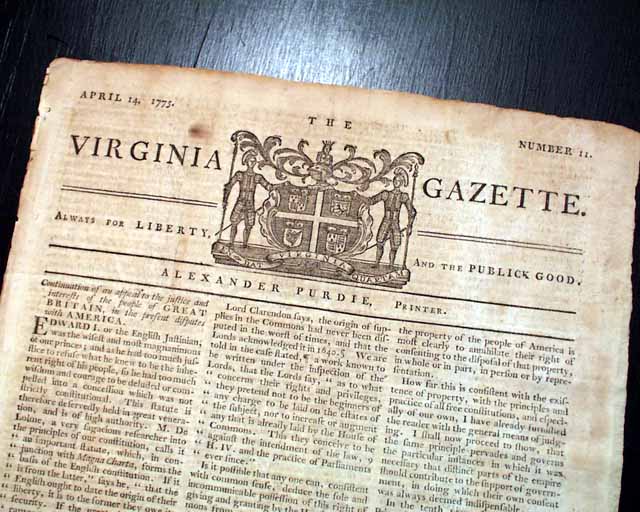 Much on the tensions with America: "God knows how this will end"...


THE VIRGINIA GAZETTE, Williamsburg (with Supplement), Apr. 14, 1775 This newspaper was published by Alexander Purdie, a distinction to be made since there were three newspapers of this title printed in Williamsburg during the early period of the Revolutionary War.
Interesting that just 5 days after this issue was printed the battle of Lexington & Concord began the Revolutionary War.
The ftpg. is taken up with a: "Continuation of an Appeal to the Justice and Interests of the People of Great Britain in the Present Disputes with America". However this is more of an historical perspective.
Page 2 has an item from London beginning: "The following is...an exact list of the reinforcement intended for Boston..." with details. Also: "...was yesterday reported that General Gage was recalled (not being violent enough) and that General M'Kay was to succeed him...Major General Howe is one of the general officers who is talked of to take upon him a command in North America." And: "Of all the American papers given into the House of Commons...none appeared so obnoxious to government as that stiled 'A League and Covenant', and it is said the crown lawyers have given it as their opinion that all the Bostonians who signed it have committed an overt act of high treason."
Another letter begins: "Great preparations are making by the Ministry to reduce the Americans to obedience. All meetings are to be deemed high treason...some of the people of Boston are to be brought home in irons...God knows how this will end. I sincerely console with you and all friends in America."
Then an address to Payton Randolph, Richard Henry Lee, George Washington, Patrick Henry and others mentioning: "...present you with their grateful...thanks for the prudent, virtuous and noble exertions...in the cause of liberty...at the late General Congress...May that sacred flame that has illuminated your minds...for the preservation of American liberty ever continue to direct your conduct..." and much more. This is followed by the thankful response, signed in type by the same men noted above.
Included with this issue is a single sheet "Supplement" of the same date Virtually the entire issue is discussion in Parliament concerning both the concerns of the British merchants who are suffering due to the trade sanctions imposed by the King: "...that every article almost of British and Irish manufacture is exported, to a very considerable amount, to America; and we import a vast deal of various raw materials from that country...". Also a debate on a motion for withdrawing troops from Boston. Too much to mention the details here; see the photos.
Six pages in total with the Supplement, untrimmed margins, handsome coat-of-arms engraving in the masthead, nice condition.