Home > Back to Search Results > Election of Patrick Henry sets the stage for his famous speech... So much more...
Click image to enlarge 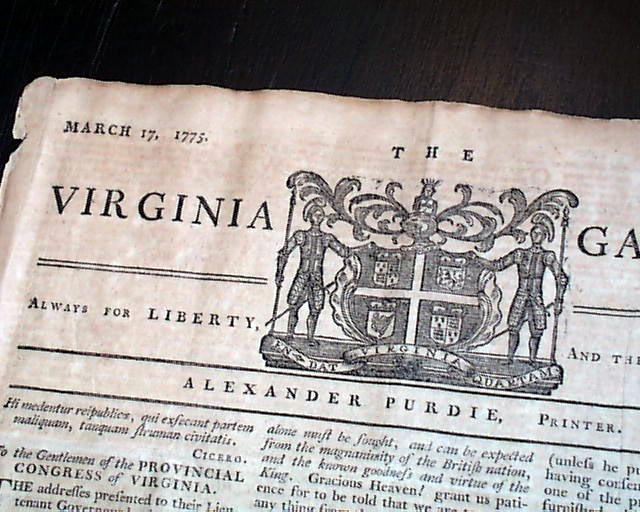 This newspaper was published by Alexander Purdie, a distinction to be made since there were three newspapers of this title printed in Williamsburg during the early period of the Revolutionary War.
The entire front page is a terrific letter: "To the Gentlemen of the Provincial Congress of Virginia" relating the treasonous action of the "...eleven polluted members of the Assembly of New York..." whose efforts are contrary to the patriotic zeal of the other colonies. This letter is a warning to Virginia to resist the work of New York--who's governor is in London with the King--and punish, economically, their work until their efforts and actions are more in line with the other colonies.
A terrific letter which carries over to take most of a column on page 2. Terrific to have this content consuming the front page of an issue dated just before the outbreak of war.
A page 2 report from London mentions that: "The petitions from the American Congress to the king has been presented to his Majesty..." with a bit more on this. Also talk of a meeting of London merchants troubled with: "...the present alarming situation of affairs with respect to America, the total stoppage of all commerce to those parts..." with much more on this.
Page 3 reports on a meeting of freeholders of Hanover county: "...they proceeded to the choice of delegates to represent them in colony conventions at the town of Richmond...the 20th of next month, when Patrick Henry, jun. and John Syme, Esqrs., were unanimously chosen...". This meeting was the historic Second Virginia Convention where Patrick Henry would give his famous speech, including: "give me liberty or give me death". There are other particulars in this report which related to that convention.
Included also is a four page "Supplement" issue. Much reporting from Parliament, including: "...Lord North...declared that so far from the meetings of the American and West India merchants being disagreeable to him, he...wishes for nothing more than as much information as possible on the American business to be lad before Parliament as speedily as possible." A bit more ftpg. discussion concerning America.
Page 2 continues with various reports including items concerning America, including: "...greatest part of the military...will soon be removed from the province of Massachusetts Bay and the blockade by sea is to be continued...". Also mention that General Carleton has been appointed governor of Quebec, and then further discussion concerning the British merchants and their anger at the non-importation hurting their businesses, this taking over one-third of the page.
Page 3 includes an address signed by John Penn, beginning: "At a time when the disputes between Great Britain and her colonies are drawing towards an alarming crisis...".
Beginning on page 3 & concluding on page 4 is a letter from the American agents in London, written to the House of Burgesses of Virginia, signed in type by: B. Franklin, W. Bollan, and Arthur Lee, noting that the: "...petition of the Congress to the King..." were presented to the Secretary of State for the king. This was likely the Declaration and Resolves of the First Continental Congress. About two-thirds of the back page has some fine content regarding the situation in America, too much to mention here (see photos).
A total of 8 pages, never-trimmed margins, a handsome coat-of-arms in the masthead, nice condition.