Home > Back to Search Results > Wealth of interesting commentary from just before the outbreak of war...
Click image to enlarge 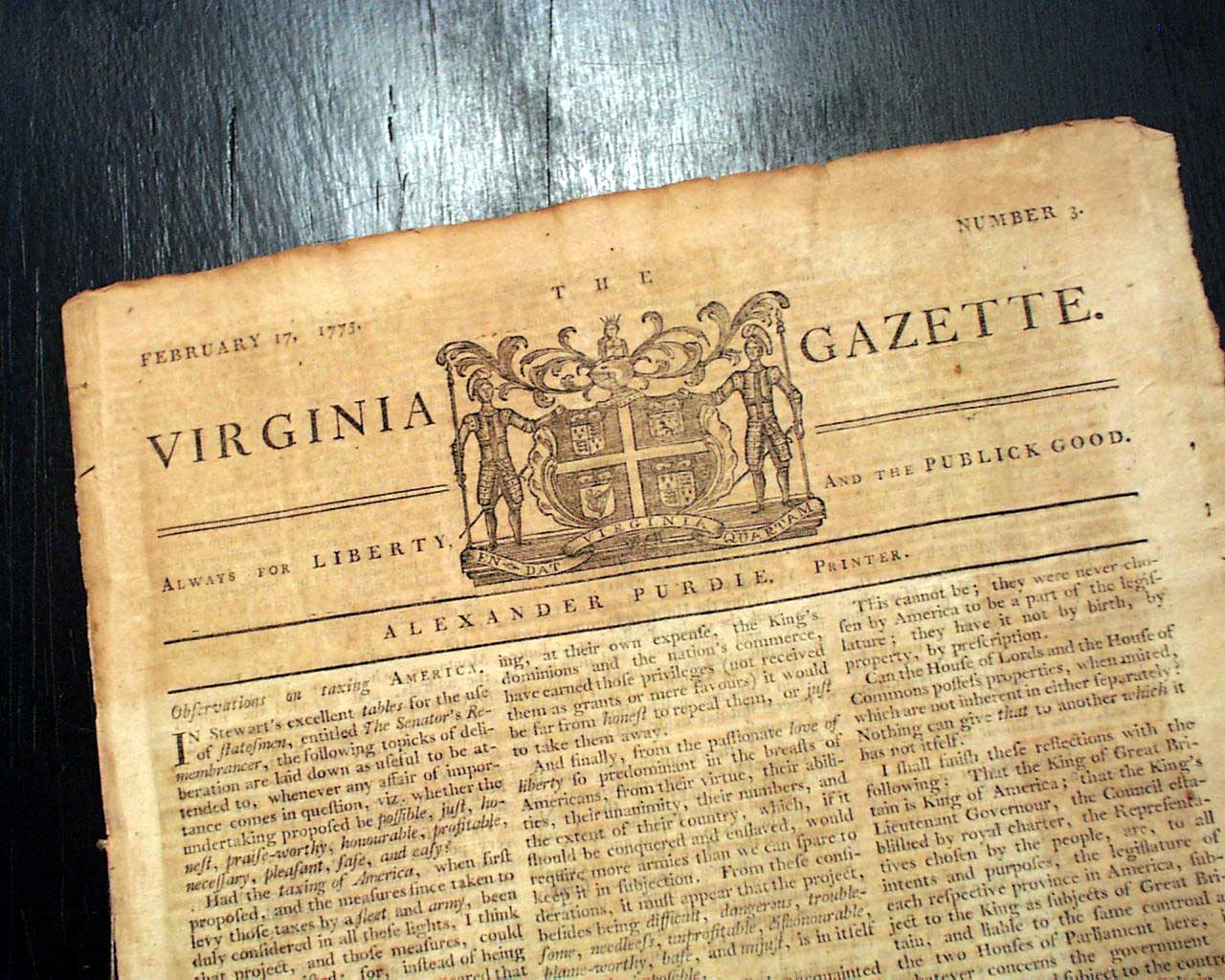 
THE VIRGINIA GAZETTE (with Supplement), Williamsburg, Feb. 17, 1775  This newspaper was published by Alexander Purdie, a distinction to be made since there were three newspapers of this title printed in Williamsburg during the early period of the Revolutionary War.
Fully half of the front page is taken up with an interesting article headed: "Observations On Taxing America". Noteworthy being just two months before the outbreak of the Revolutionary War at Lexington & Concord.
One bit notes in part: "...Had the taxing of America, when first proposed, and the measures since taken to levy those taxes by a fleet and army, been duly considered...instead of being an easy business, it must have appeared that to raise taxes by a external government, from those who had paid them only to their own internal government, would be a matter of great difficulty..." then more on second thoughts about the current taxing plan. Near the end is: "...from the passionate love of liberty so predominant in the breasts of Americans, from their virtue, their abilities, their unanimity....if it should be conquered or enslave, would require more armies than we can spare to keep it in subjection...". A lesson that would take them seven painful years to learn.
The following piece takes a different view on the troubling America/England troubles, noting in part: "...Is not the House of Commons of Great Britain the House of Commons of America? This cannot be; they were never chosen by America...Perhaps a dispassionate inquiry into some such opinions may lead us gradually to that happy point, where the superiority of the parent state & the submission of our colonies may be united."
Page 2 has various news reports, the top of the page mentioning: "...There are two pamphlets brought by the last ships from Virginia which give us a pretty clear insight into the present American politicks. Mr. Jefferson, in his 'Summary View', speaks of the acts of trade passed in Charles II time, as proceeding from a spirit of tyranny...".
Page 3 has more news items including a brief item noting: "...nothing will be done in the present session on American affairs, except...to enforce, with all the power placed in his hands, the late acts with regard to the Americans."
But further on is a quite noteworthy item: "The substance of the late news from America...The Congress have unanimously voted a non-importation agreement. The province of Virginia...have agreed not to plant any more tobacco, and the plant now in the ground the other colonies have agreed to take; so that the present year's crop is the last that will be sent to Great Britain unless matters with America are accommodated. The duty upon tobacco is a very principal article of the revenue of Great Britain."
With a dateline of December 9, this would seem to be the result of the historic Continental Association, which outlined restrictions on imports & exports of a wide range of items.
Also on page 3 is mention that the American non-importation of nail will result in the unemployment of thousands of people. An an ominous item: "...detachment of 100 men...commanded by Major Balfour, embarked on board a vessel bound to Marshfield. this maneuver has occasioned many conjectures."
Additional reports as well, carrying over to the back page, including a list of the freeholders recently elected in a county of Virginia.
Included as well is a single sheet "Supplement" issue with has additional American-related content, including a bit from Parliament noting: "...Mr. Burke, in the same speech, mentioning the present situation of America, drew a fine allegorical picture of that country, which he compared to a funeral. Trade and commerce...were the pall bearers; the principal merchants & traders were chief mourners...". And a bit on Parliament's disappointment with General Gage, with some detail.
Then a report from New York noting in part: "...You may confidently assure the publick that the New York Assembly has adopted & approved all the proceedings of the Continental Congress..." with more. American continues on the back page of the Supplement as well.
Also of curious interest is an "advertisement" mentioning: "...necessary that the claimants in the patent to Mr. John Savage & others, who were with Col. George Washington at the battle of the Meadows, for 28,627 acres of land on the river Ohio and the Sandy Creeks, should come to a speedy division of the said land..." with more. This battle was fought in 1754.
A wealth of interesting content from just before the outbreak of war, giving a fine sense of the tensions existing at the time. Six pages with the Supplement issue, never-trimmed margins, a handsome coat-of-arms engraving in the masthead, very nice condition.