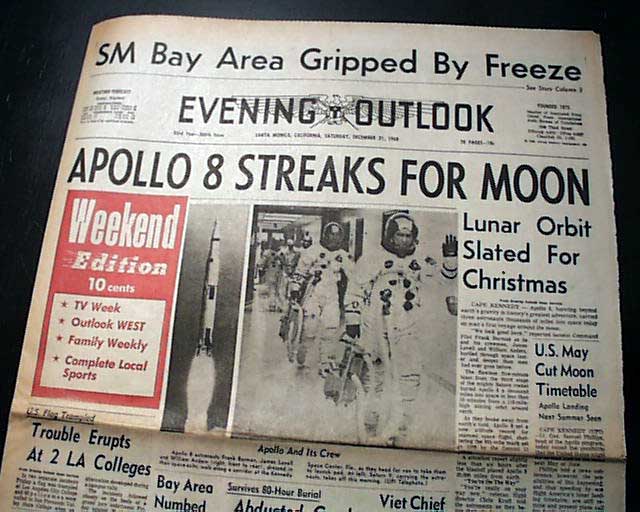 The front page has a nice banner headline: "APOLLO 8 STREAKS FOR MOON" with subheads and two related photos. Photo of each astronaut at the top of page 2. Of course newspapers on the Apollo 11 mission were saved by many because of the historic Moon landing making this issue much more uncommon.
Complete 1st section only with all 12 pages, nice condition.

wikipedia: Apollo 8, the second human spaceflight mission in the United States Apollo space program, was launched on December 21, 1968, and became the first manned spacecraft to leave Earth orbit, reach the Earth's Moon, orbit it and return safely to Earth. The three-astronaut crew — Commander Frank Borman, Command Module Pilot James Lovell, and Lunar Module Pilot William Anders — became the first humans to travel beyond low Earth orbit, the first to see Earth as a whole planet, the first to directly see the far side of the Moon, and then the first to witness Earthrise.