Home > Back to Search Results > Wealth of great content on the beginning of the Civil War...
Click image to enlarge 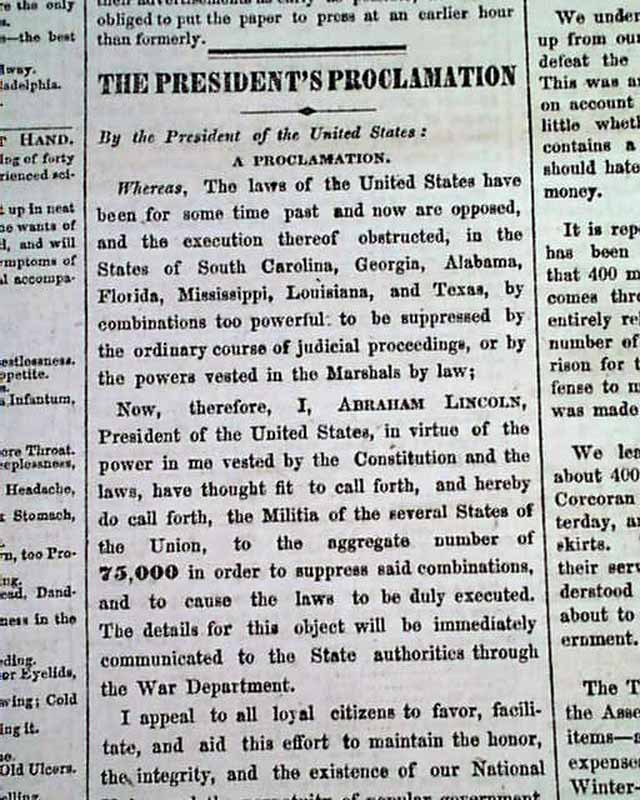 Wealth of great content on the beginning of the Civil War...


NEW YORK TRIBUNE, April 15, 1861  A terrific issue packed with much fine reporting on this critical period at the beginning of the Civil War.
Page 4 has: "The President's Proclamation" calling for 75,000 soldiers for the war, signed in type: Abraham Lincoln.
Page 5 has a wealth of reporting on the opening salvos of the war with first column heads: "THE PRO-SLAVERY WAR" "The Bombardment of Fort Sumter" "The Fort In Flames" "Its Guns Silenced" "Surrender of the Fort & Garrison" "Forty Hours' Cannonading" "Not a Life Lost in the Conflict" "The Port of Charleston Blockaded" "Threatening Speech of the Rebel Secretary of War" "The President's Address" "He Reiterates the Position of the Inaugural" "The Property of the Government Must be Held" "Rebel State Mails to be Withdrawn" "Preparations To Evacuate the Fort" and even more.
There are over 2 full pages of reporting of these opening events of the war.
Eight pages, some damp staining near the bottom, nice condition.