Home > Back to Search Results > Huge map... The Monitor vs. the Merrimac...
Click image to enlarge 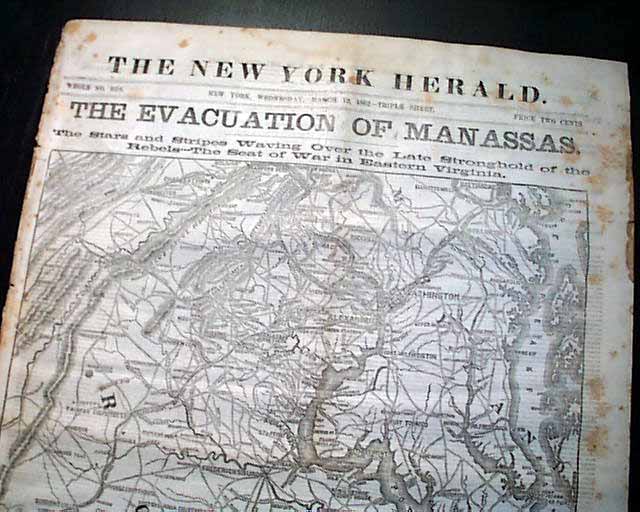 Simply an incredible Civil War map newspaper, as the entire front page is taken up with a huge map headed: "THE EVACUATION OF MANASSAS. The Stars and Stripes Waving Over the Late Stronghold of the Rebels--The Seat of War in Eastern Virginia."
This map is very detailed and shows from Baltimore to Newport News, to Charlottesville and everywhere in between.
Of added significance is the page two report on the Monitor versus Merrimac with heads: "Iron Clad Ships" "Their Great Value as Vessels-of-War" "The Great Trial Battle Between the Monitor and Merrimac" "The Great Trial Battle" followed by a great deal of text. Other heads include: "The New Iron-Clad Steamers" "The Constructors of the Monitor" "and more.
Page 3 also has a Civil War map headed: "The Victory In Arkansas" and one column war heads: "The Great Fight in Arkansas" "Our Splendid Victory at Pea Ridge" "The Merrimac Still Remains in Elizabeth River" and more. More war reporting on page 7.
Twelve pages, various foxing, a few minor archival mends on page 2, good condition.